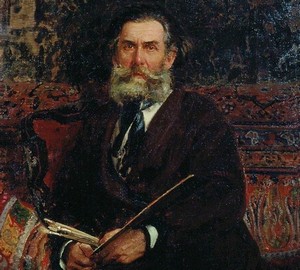 Alexey Petrovich Bogolyubov was a 19th century Russian marine painter, naval officer, brilliant master of landscape and sea battle scenes, and patron of the arts. His merits were highly recognized – he had the rank of actual Privy Councillor and was awarded many orders. He was born in 1824 on the 16th of March in Novgorod province, on the estate of his father Pyotr Gavrilovich Bogolyubov in the village of Pomeranye. His mother – Fekla Aleksandrovna – was the daughter of the Russian writer A.N. Radishchev. Alyosha liked to draw from an early age, so his favorite gifts were pencils and paints. The little boy was only six years old when his father died. In 1832, the boy was accepted into the Tsarskoye Selo Cadet Corps, and two years later was transferred to the Naval Cadet Corps in St. Petersburg. Studying was given to the bright young man easily, he had a mischievous and cheerful nature. In his free time he drew a lot, including caricatures. After one of them – to the examination committee – he was almost expelled from the corps, and he gave his word of honor not to draw caricatures until the end of his studies. Having completed his studies, in 1841 he received the rank of midshipman and began serving in the Baltic Fleet. Thanks to his voyages abroad, the young officer becomes acquainted with the works of foreign artists. He draws a lot, depicting what he has seen in paintings and sketches. 1849 was a key year for him – during the voyage to Madeira his drawings were seen by Duke Maximilian of Leuchtenberg, who was president of the Academy of Arts. He advised the young man to take up painting seriously and helped him to remain in the naval service after entering the Academy. Four years later, in 1853, the young man graduates with a large gold medal. He was appointed an artist of the Main Naval Staff and ordered a cycle of paintings about the Crimean War. The next 6 years the young man travels around Europe, continuing his training in Paris and Dusseldorf. To fulfill the order, the painter goes to Constantinople, where he writes many sketches for future paintings devoted to the deeds of the Black Sea Fleet. In 1859, the artist got married, but six years later his wife Nadezhda Pavlovna died of consumption. Returning to Russia in 1860, he presents his many works at an exhibition at the Academy of Arts. His views of Italy, France, pictures of naval battles, brought him well-deserved recognition and great fame. For these works he is awarded the title of professor. Alexander II bought all the painter’s canvases about the Crimean War and ordered a new series of works about the fleet of Peter the Great. The artist also takes part in the production of atlases of the coast: first the Caspian Sea, and then the Gulf of Finland. Alexey Petrovich travels a lot in Russia, takes part together with his brother in the design of the guidebook on the Volga. A huge impression on him has Moscow, he writes a lot of Moscow views. At the same time, the painter gets acquainted with the Itinerants and takes part in their exhibitions. More than ten years Bogolyubov works on creation of pictures of sea battles of times of Peter I (“The Battle of Gangut”, “The Battle at the island of Ezel”). Besides pictorial expressiveness his works are distinguished by the authenticity of details. His Peter and Crimean cycles almost completely cover the history of the Russian Navy. Due to deteriorating health, he was forced to move to Paris in 1873, but he spent every summer in Russia. His Paris home was open to Russian artists, with I. Repin, V. Serov, V. Polenov, and I. Pokhitonov working there. He continued to work a lot, creating magnificent landscapes (“The Mill in the Vole”, “The Surf in Meton”), and, of course, he did not forget his favorite maritime theme (“Explosion of the Monitor”, “Shipwreck”). In 1885, he opens the first public museum in Saratov, to which he gives part of his paintings, and seeks to give it the name of A.N. Radishchev. He left his memories in a manuscript of an unfinished book “Notes of a Sailor-Painter”. The artist died in 1896 in France and was buried in St. Petersburg.

The Battle Of Athos 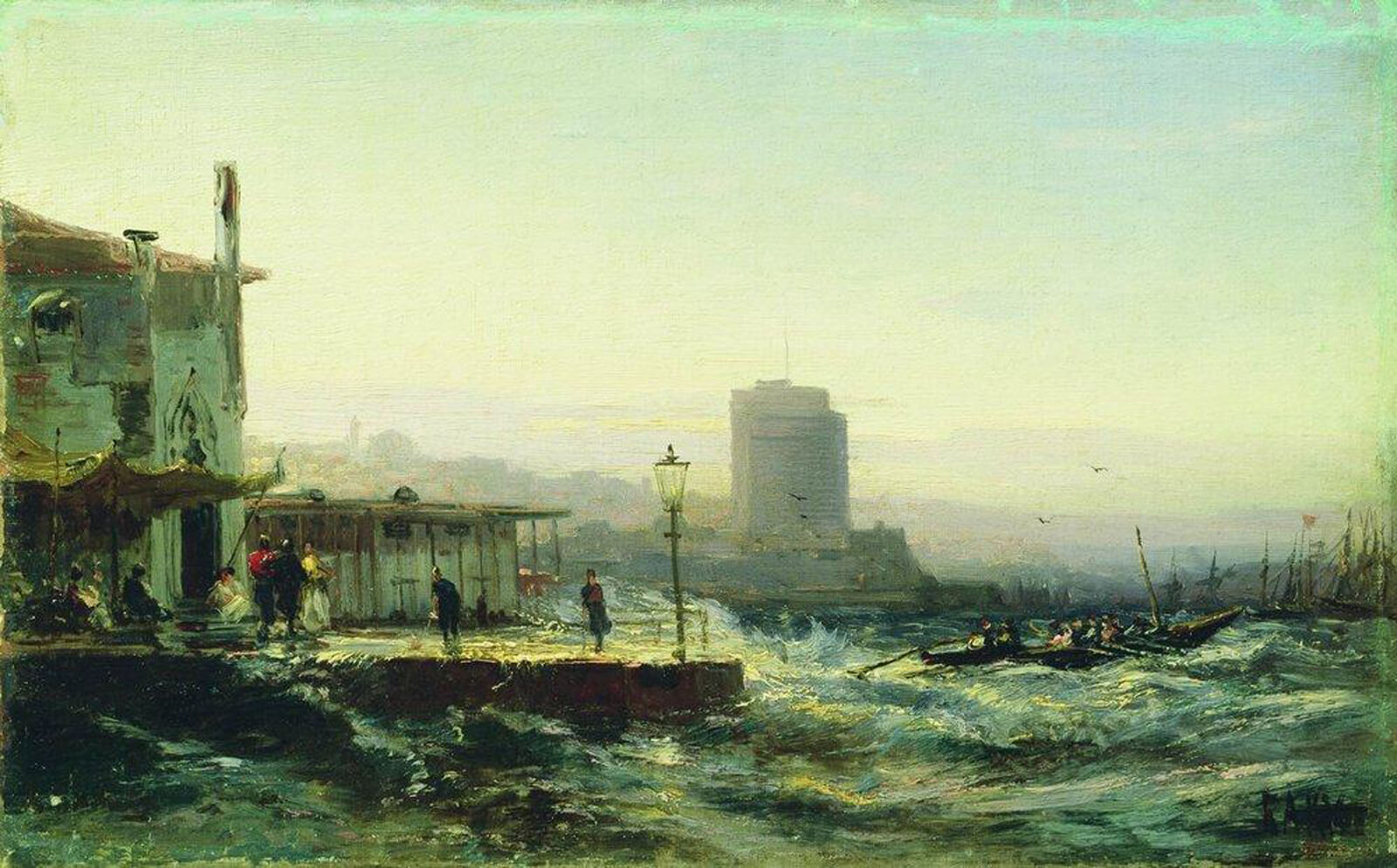 Riding On The Neva 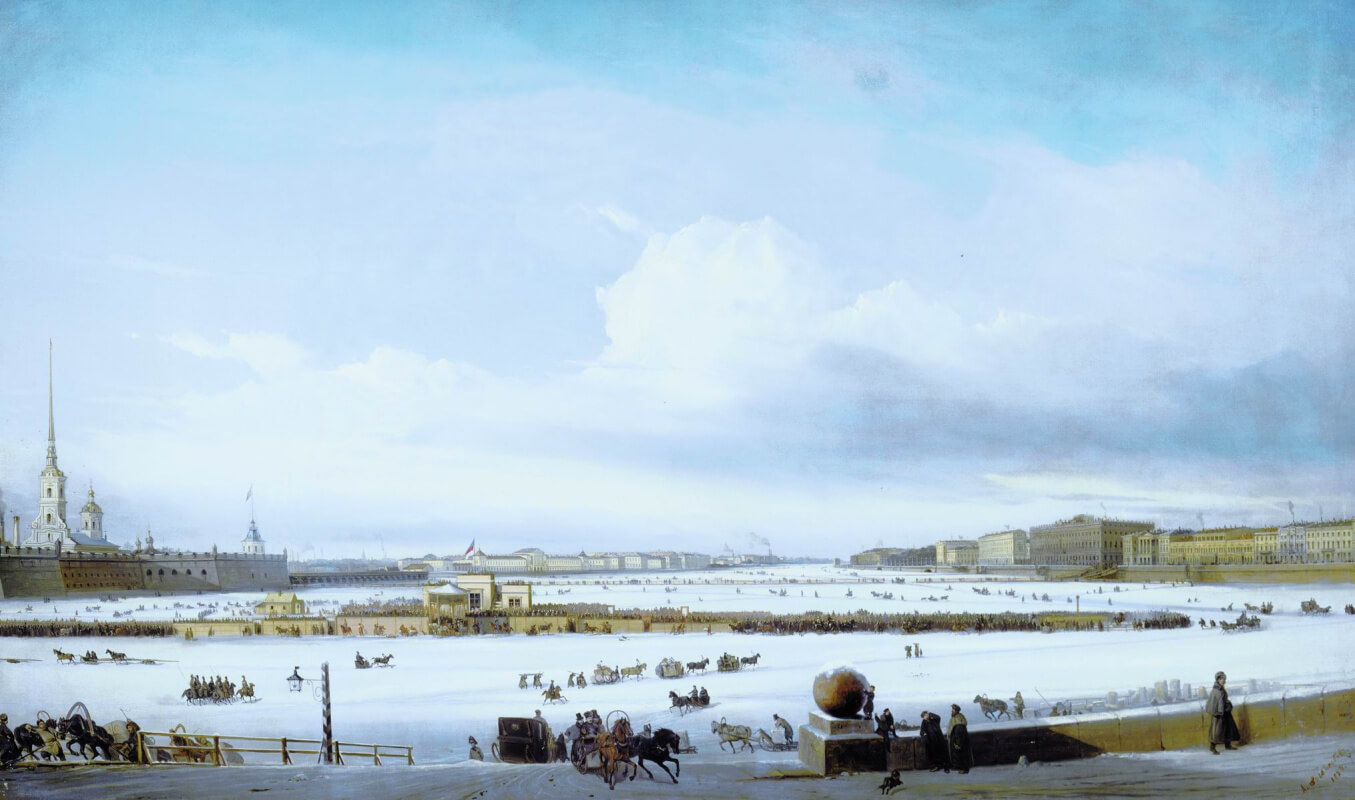 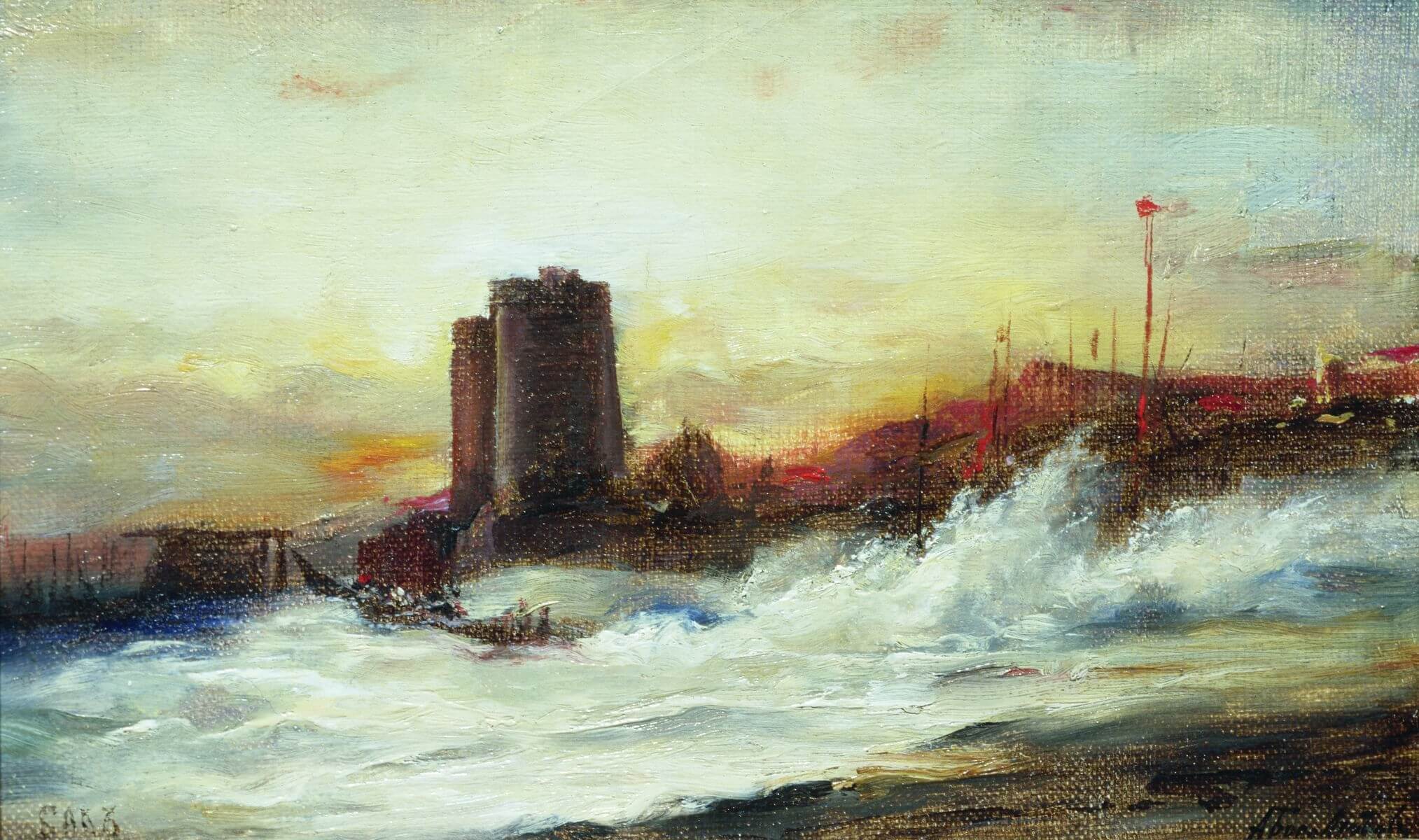 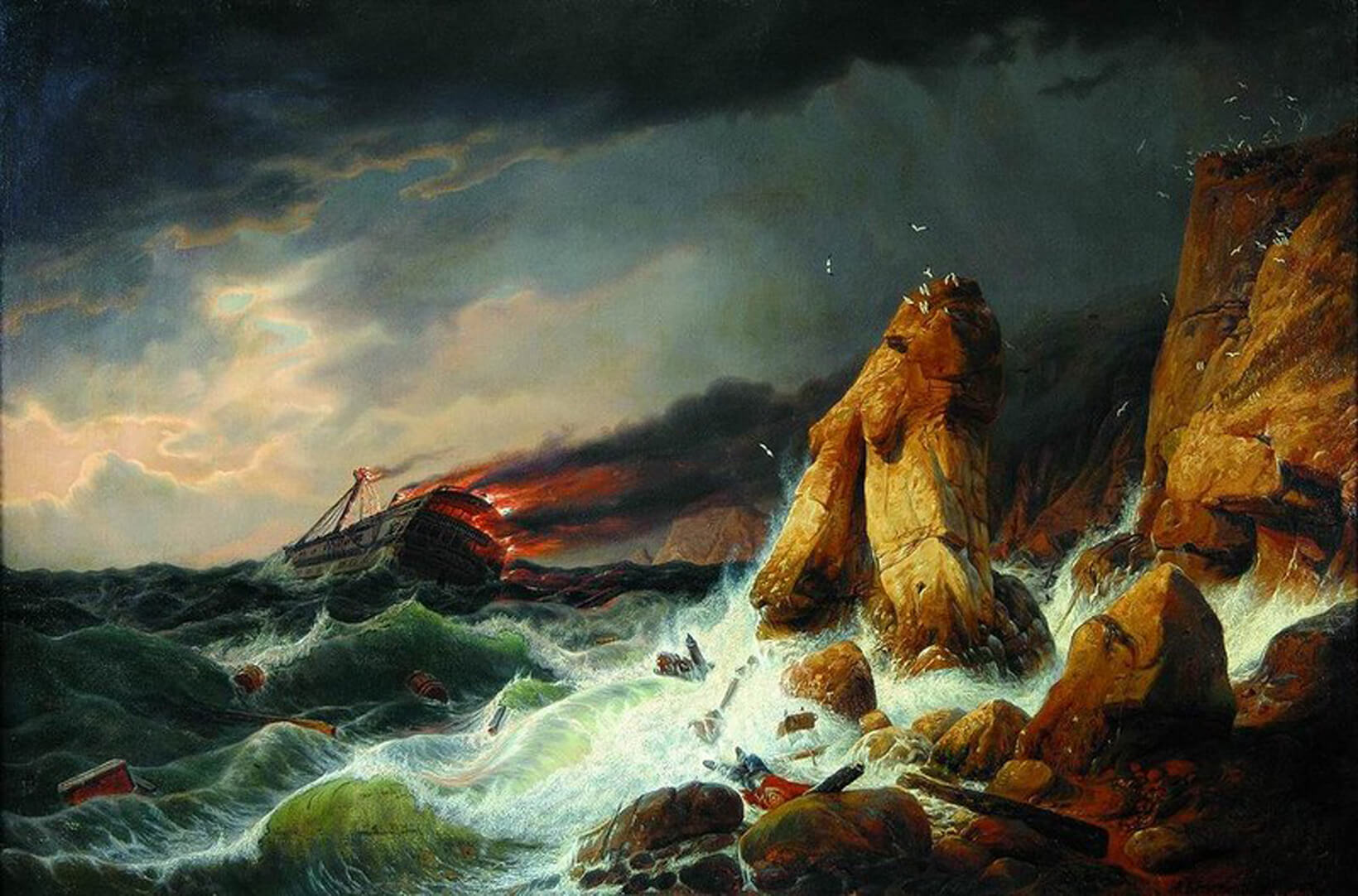 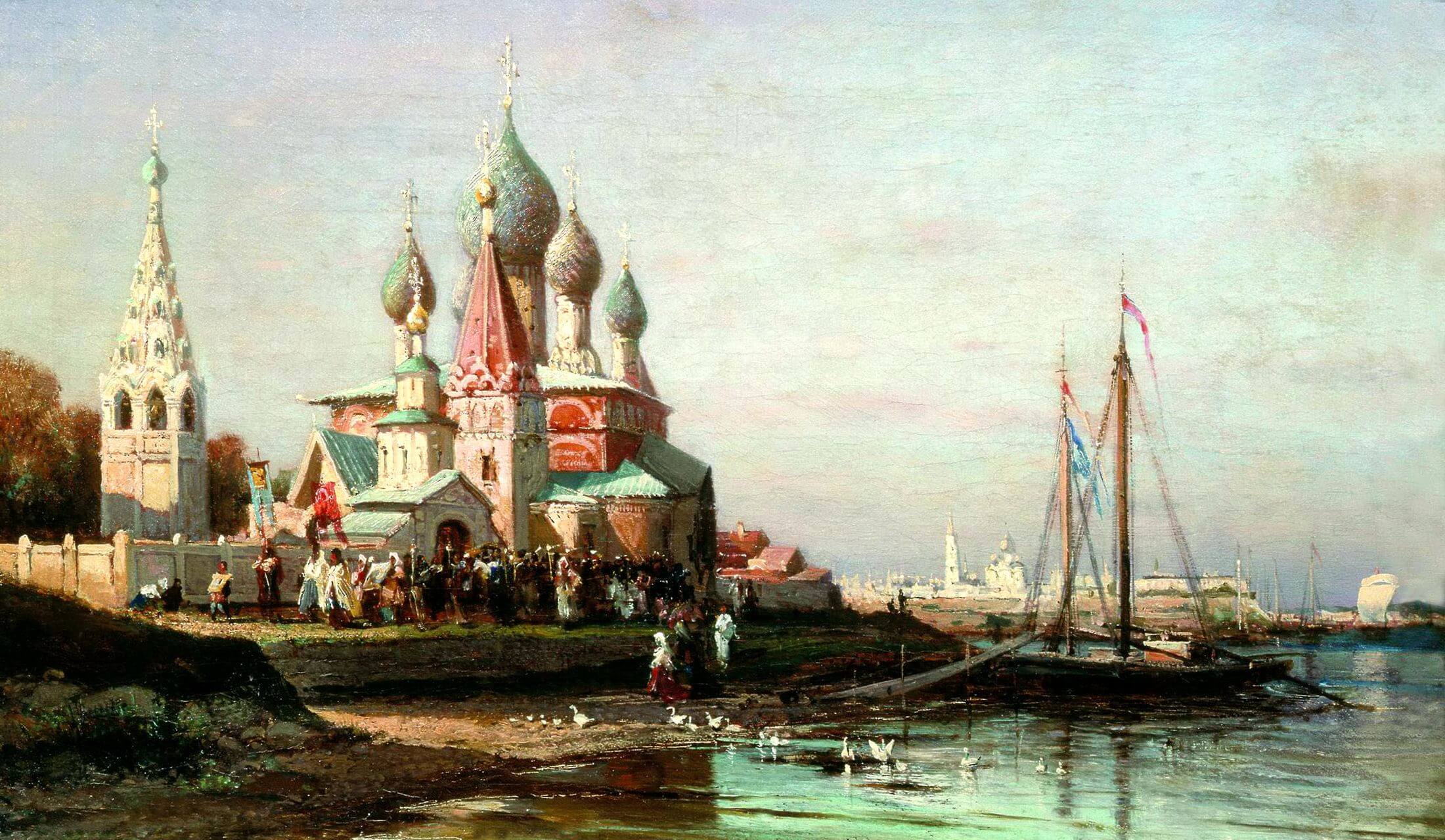 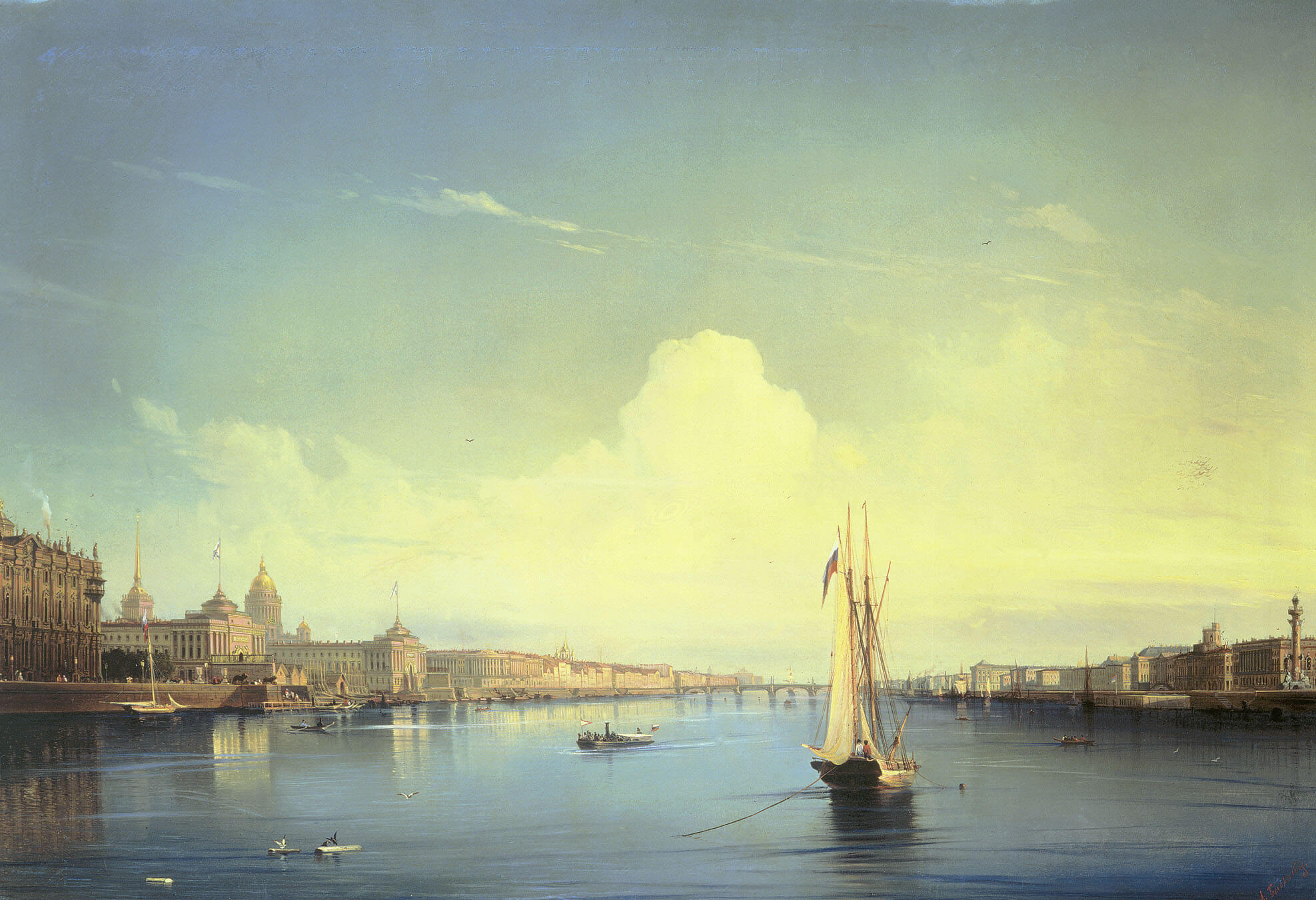