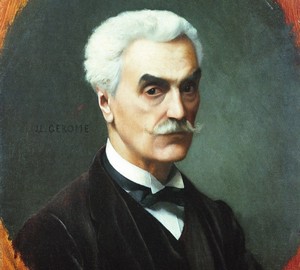 The famous French artist Jean Leon Gérôme was born on May 11, 1824, in the family of the jewelry master Pierre Gérôme. His artistic abilities manifested themselves at an early age. In the local gymnasium, Jerome began to learn the technique of drawing. His father was skeptical of his son’s desire to become a great artist, assuring him that they were all poor and should look for a more profitable occupation for life. Claude Cariage, who taught the basics of academic painting, became Jerome’s main mentor. The young gymnasium student’s copy of Decamp’s painting delighted Paul Delaroche, whose work was unanimously approved by the public and critics. In 1841, having received positive recommendations from Cariage, the young man goes to Paris. His father gives him some money and one year to realize what it means to be an artist. If unsuccessful, exactly 365 days later his son is welcomed into his father’s home to continue the jewelry dynasty. Soon, his father, impressed by his son’s extraordinary abilities, assigned him an annual allowance of one thousand francs. Delaroche singled out Jerome among his students and often took him to travel with him. The Roman trip (1843) left an indelible impression on the young artist’s soul. Surprised that no European master had yet been interested in gladiators, the young man discovers the world of ancient Greece and ancient Rome. He searches for primary sources, bypasses museums, hoping to see images of gladiatorial fights. The typhus epidemic that broke out in 1844 almost deprived the world of the famous artist. Only the care of his mother, who came from Vézelay to her son, saved the painter. Charles Glair was the next mentor of Jerome. Although the latter categorically denied the Swiss influence on his training, Delaroche’s gloomy palette in his paintings was replaced by Gleire’s luminous range; a fascination with the Middle East emerged. “Young Greeks amusing themselves with cockfighting” was the debut painting exhibited by the Salon. The future painter had no hope of success. Delaroche insisted on the exhibition, but pointed out that the former pupil could paint much better. The canvas was noticed by critics and defined its historical purpose. The revolution of 1848 brought major changes in the life and work of Jean-Léon Gérôme. He and his friends formed a “phalanx of artists,” which later became known as the “Jérôme school. The artist’s name was often implicated in scandals. The culprit were his explicitly erotic variations. The public considered these compositions obscene for display to the public. But the purchase of the canvas “Greek interior” by President Louis Napoleon slightly cooled the ardor of those yearning for reprisals against “debauchery”. The master’s portrait painting is best known for an unpleasant incident with Madame Durand, whose secret admirer was Jerome. He persuaded her to do a portrait and then presented her with a bill – 2,000 francs. The case went to court, and the verdict was sad. The judge found no resemblance to the woman in the portrait and therefore released her from the purchase. The life of the French artist is interesting and fascinating. Frequent travels around the world were reflected in his paintings. Antique themes: “Ave Caesar,” “Frina before the Areopagus,” followed by Egyptian motifs: “Camels at a watering hole,” “Rest in the Russian camp” – a reminder of the meeting with Russian soldiers. However, the love of all Jerome’s life remained antique heroes. At the 1878 exhibition, he presented his first sculpture, Gladiators, and for the statue of Tanagra the state paid him 10,000 francs. The forty-year-old Jean-Léon married the young 20-year-old Marie Goupil and later became the father of four children. The artist died Jan. 10, 1904 in his studio. Many people came to say goodbye to him. He is buried in the Montmartre cemetery. 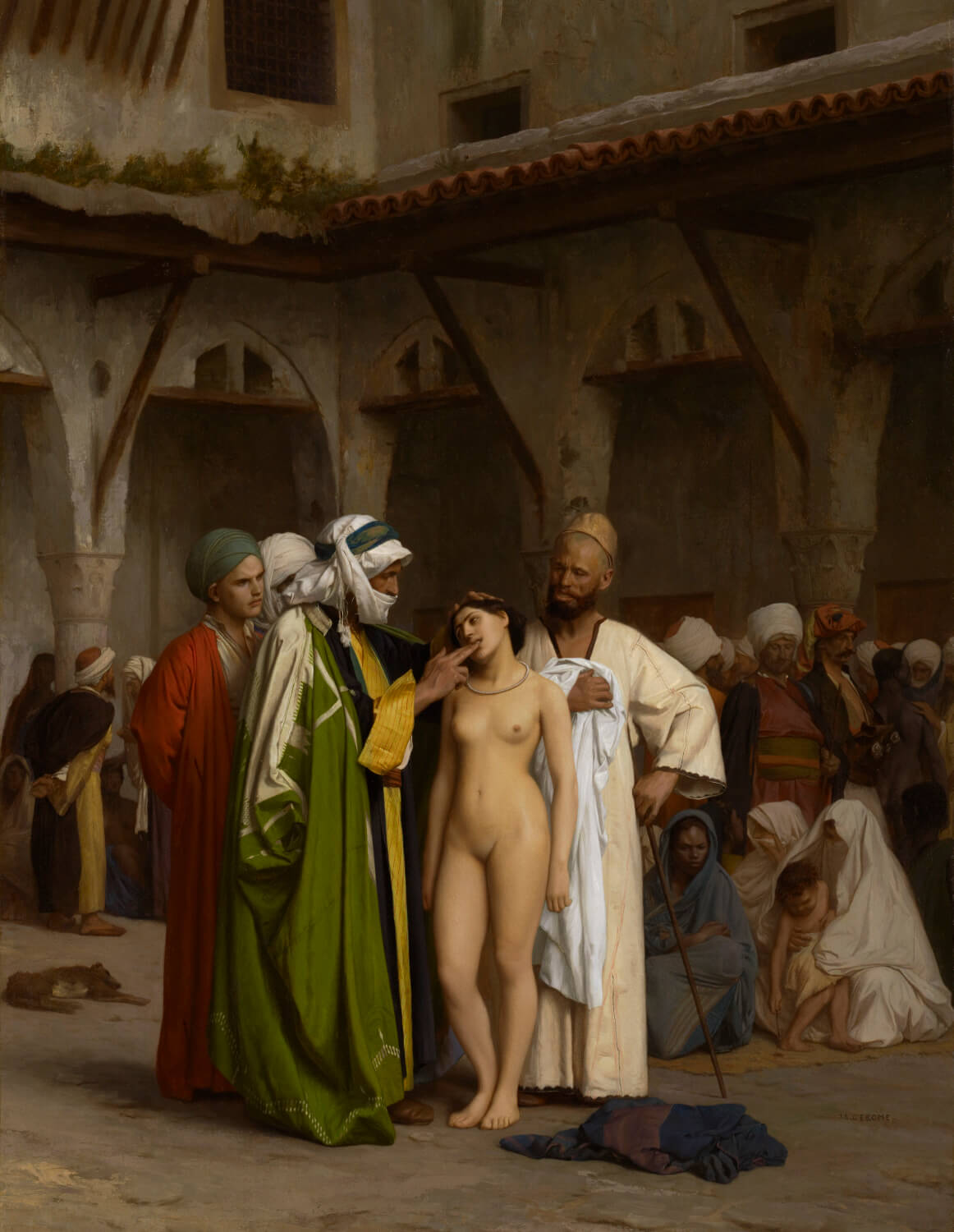 Pool In A Harem 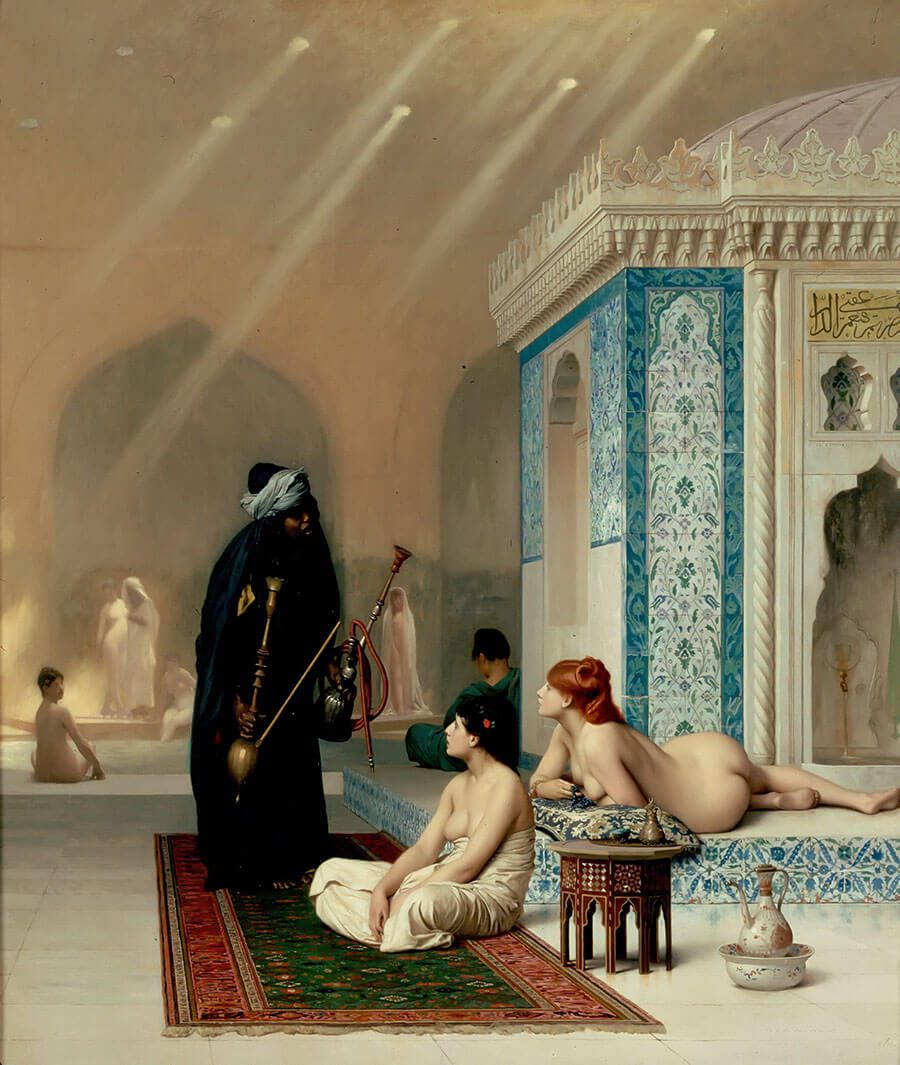 Battle Of The Gladiators 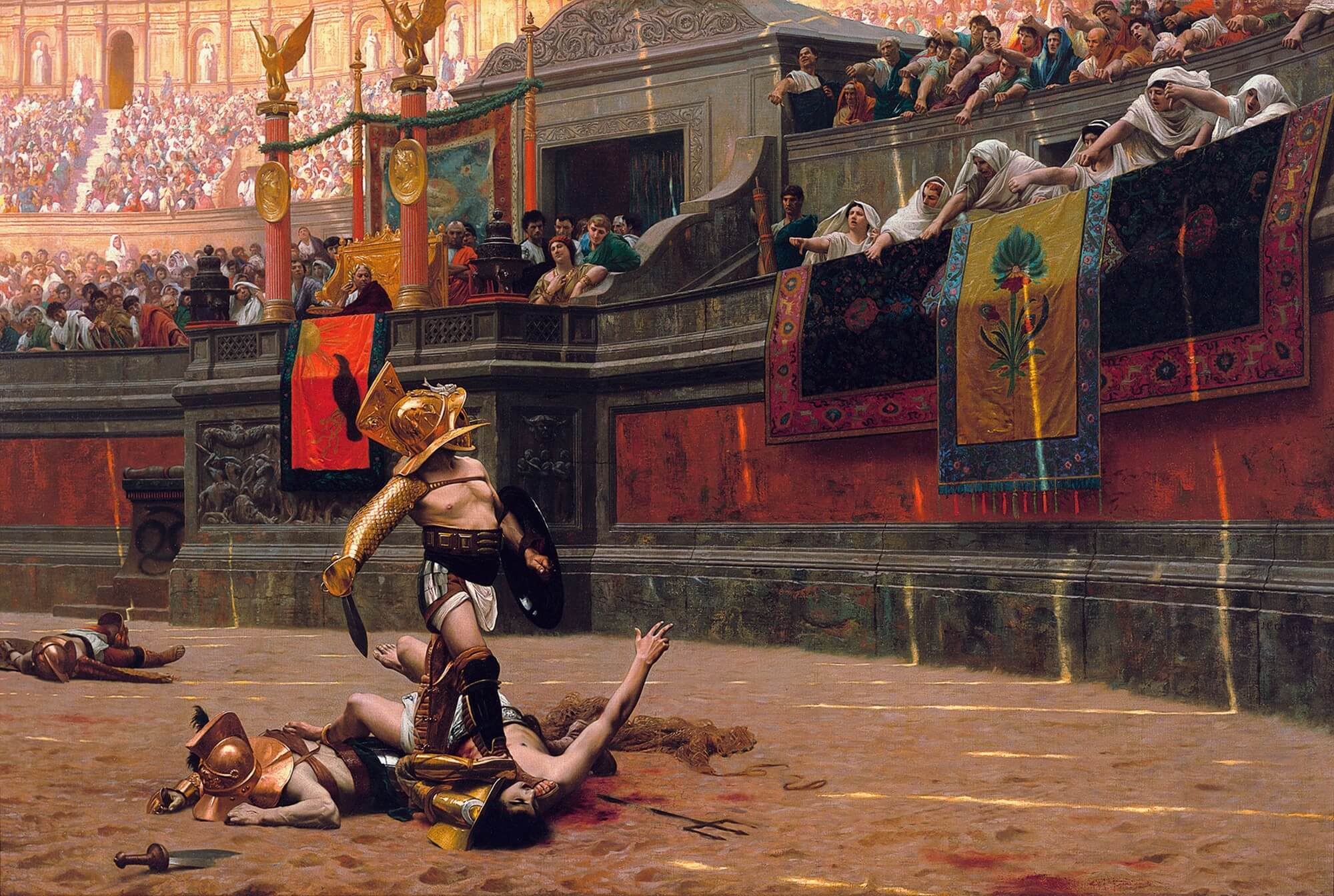 Duel After The Masquerade 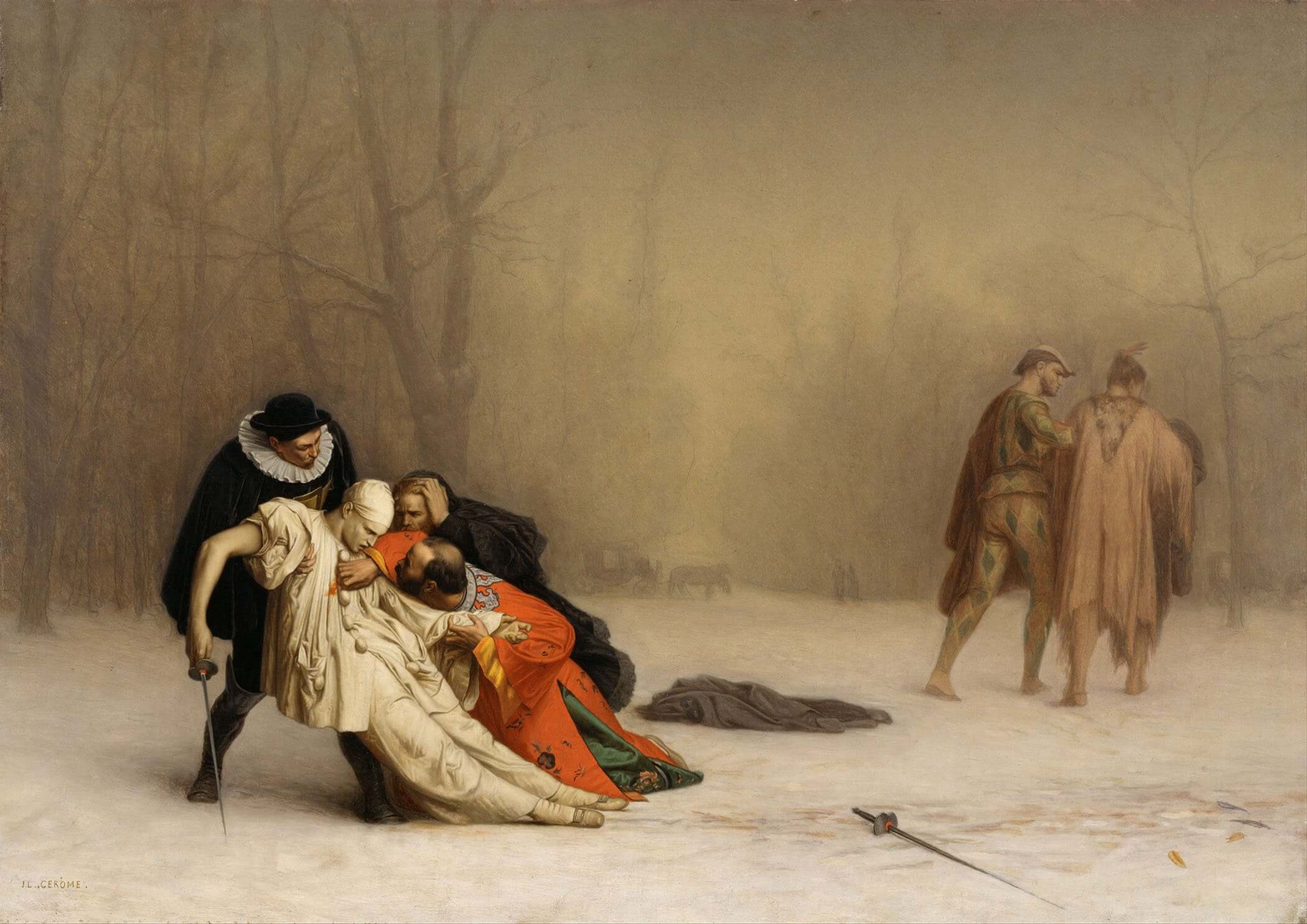 Frina Before The Areopagus 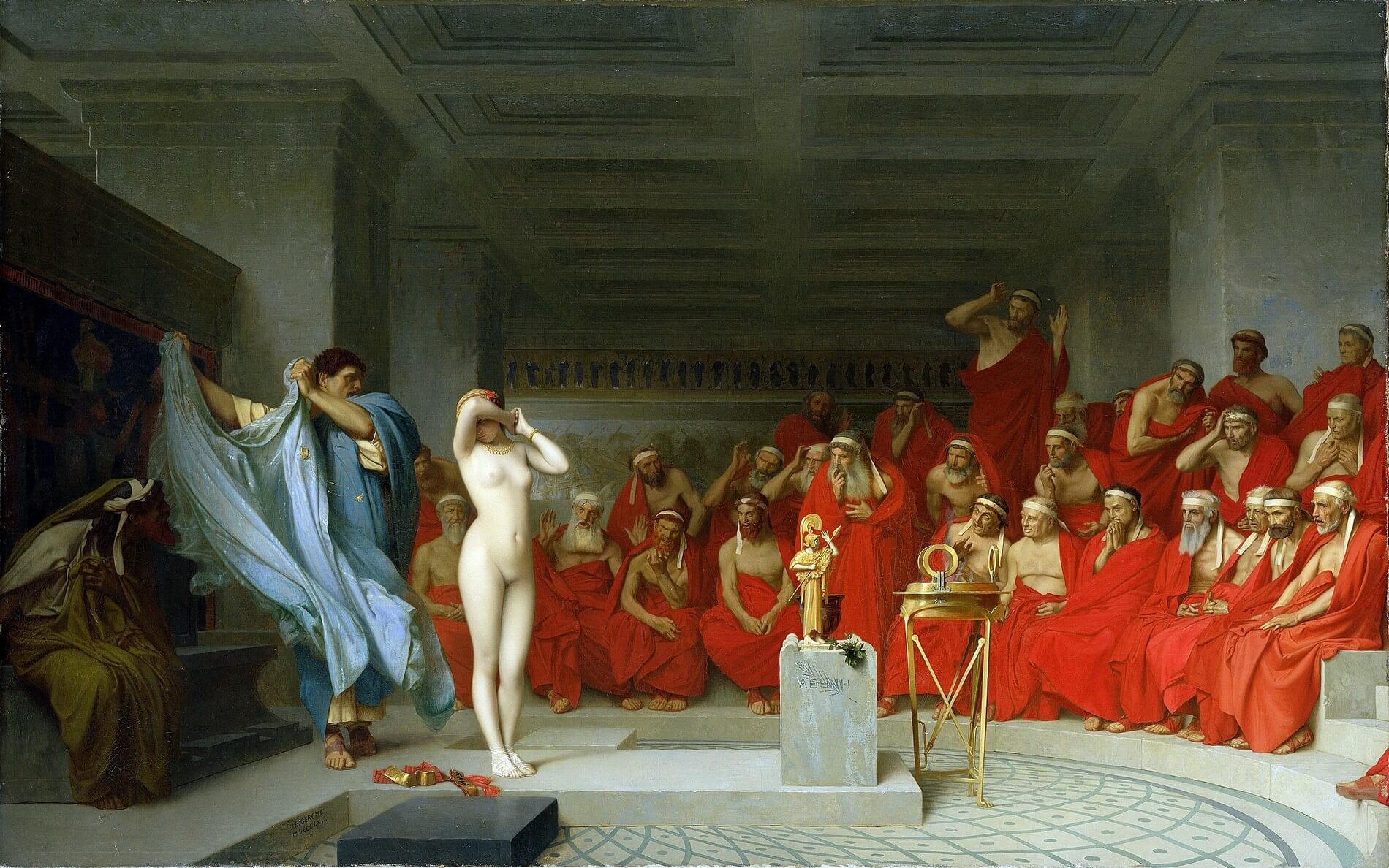 Truth Coming Out Of The Well 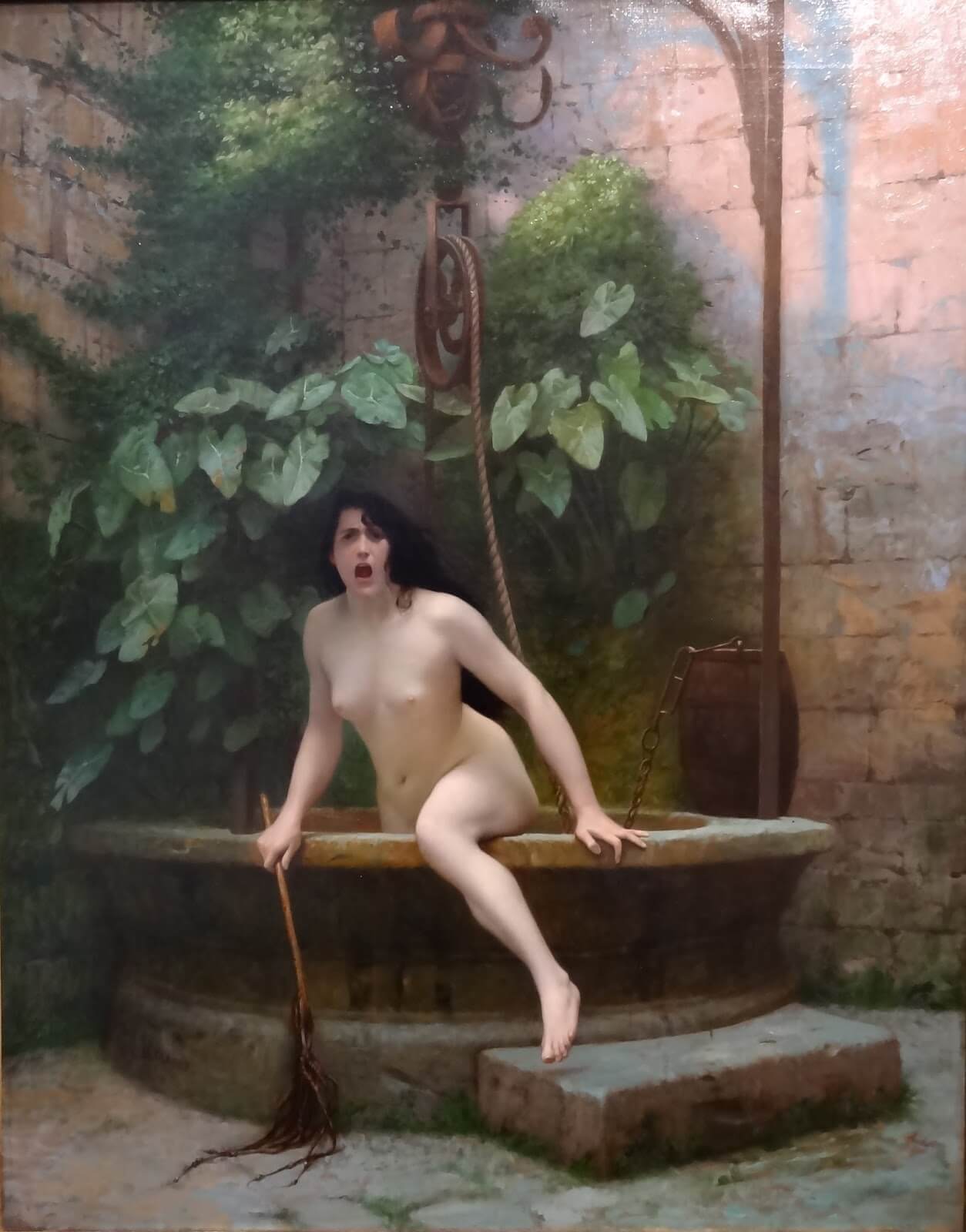 The Last Prayer Of The Christian Martyrs 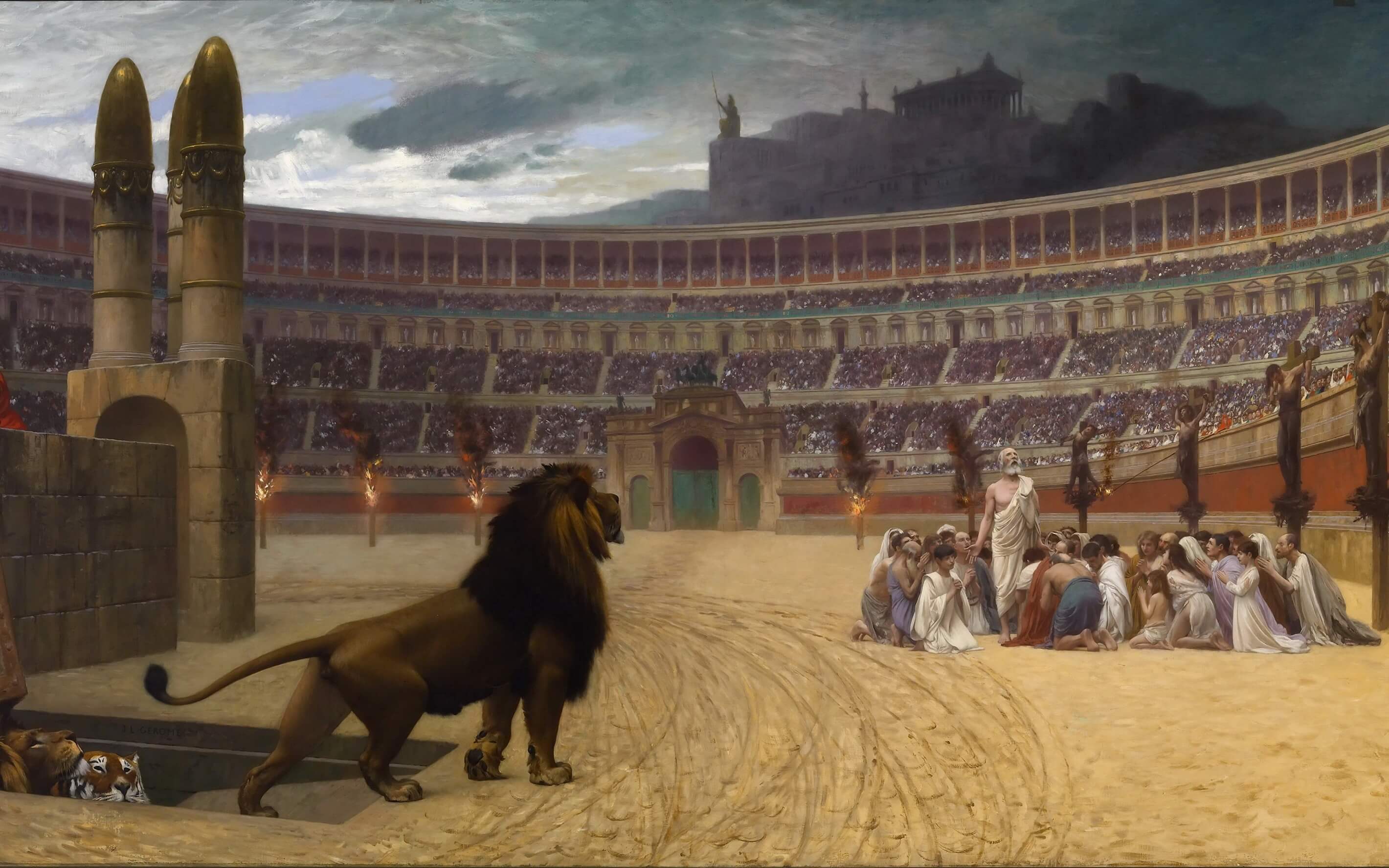 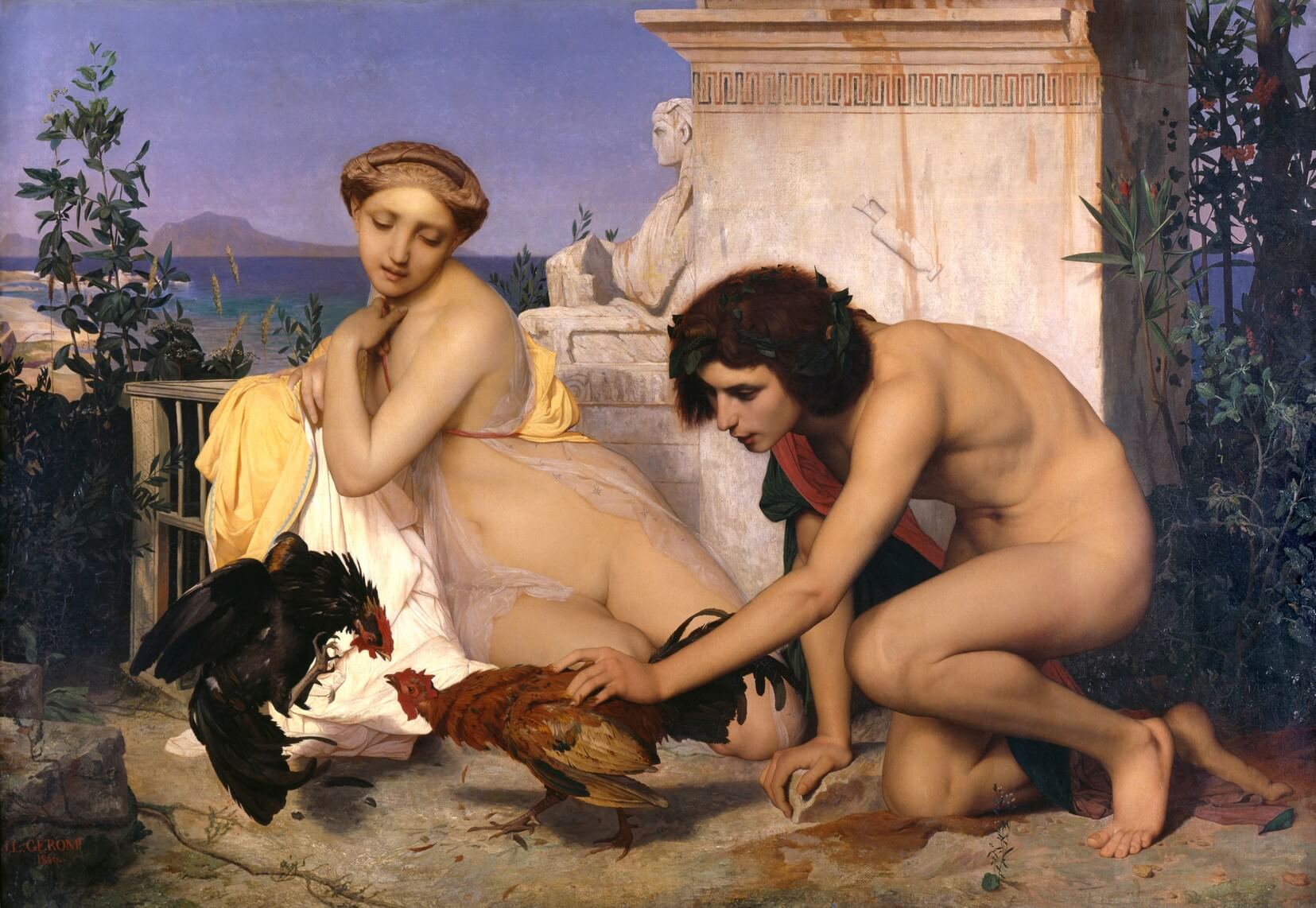