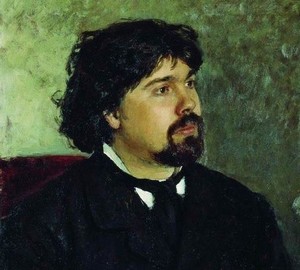 Surikov Vasily Ivanovich made a great contribution to the development of the Russian art school. He was born on January 24 (January 12 – on the old calendar), 1848goda in the Siberian city of Krasnoyarsk. His parents, father Ivan Vasilievich Surikov, a provincial registrar, and mother Praskovya Fedorovna, née Torgoshina, belonged to the descendants of the first Cossack families. His paternal ancestors may have come to these regions from the Don almost at the time of Yermak. Cossack ancestry was a matter of special pride for Surikov – this is evidenced by the fact that Vasily Ivanovich called himself a Russian Cossack. About Surikov early years, his childhood, we know mainly from the work of poet M. Voloshin. Shortly before the painter’s death, in 1913, M. Voloshin, working on a monograph about Surikov, commissioned by I. Grabar, often met and talked with the great artist. In 1859, the artist’s father died, his family finds themselves in a difficult financial situation. Praskovya Feodorovna was forced to rent the second floor of her house to tenants, and she did not give up the occasional earnings. Surikov graduates from Krasnoyarsk district school in 1861 and entered the service of the provincial administration – clerk. By this time he had already decided that he would be an artist. Great luck and good fortune for Surikov was the acquaintance with N. Grebnev, who became his first mentor and teacher. Grebnev recognised the teenager’s great potential, and gently but persistently began to steer him in the right direction. Krasnoyarsk Governor P. Zamyatin, who sent a petition to St. Petersburg to enroll Surikov in the Academy, also took part in the fate of the talented man. Despite the fact that the petition was accepted, Surikov was refused a stipend at the Academy. Industrialists from Siberia in those days distinguished by the breadth of their patronage of the arts, not sparing money for both cultural and educational work. The goldsmith P. Kuznetsov was among them, who took it upon himself to provide Surikov with everything he needed for the period of his studies at the Academy. At the end of 1868, Surikov set off for the conquest of the art world with Kuznetsov’s industrial convoy. The journey to St. Petersburg took two months. However, they did not take Surikov to the Academy straight away, after which he was enrolled as a volunteer student at the Society for the Encouragement of Arts, where he “drummed up” his skills by drawing plaster casts. A full-fledged student of the Academy Surikov became in August 1870, having completed a three-year program of study independently. This was followed by triumphs. Unfortunately and to the indignation of Surikov’s teacher P. Chistyakova, which guaranteed a gold medal abroad, Surikov did not receive after graduation from the Academy. Six months later Surikov was nonetheless offered a trip abroad, but declined it, taking up the task of painting frescoes in the Cathedral of Christ the Saviour in Moscow. Thanks to his work in the temple, the artist gained financial independence and a new environment. Once in Belokamennaya, Surikov immediately felt a sense of kinship and moved permanently to the Mother See. His paintings “Menshikov in Berezov,” “Boyarynya Morozova” and “The Morning of Streletsky Execution” brought Vasily Ivanovich deserved recognition and a place among the foremost painters of that era. After his 1881 showing of “Morning of an Urgent Execution,” Surikov became an active member of the Wanderers’ movement for a full 26 years, only to leave the Society in 1907, realising that the movement was holding back further development of painting. As for the personal life of Vasily Ivanovich, it is necessary to note his marriage to Elizaveta Avgustovna Shaare, concluded in 1878. They lived happily for ten years, Elizabeth Augustovna gave Surikov two daughters. After a serious illness she died in 1888, her death caused a severe depression Surikov. He stopped writing and in 1889 left with the children in Krasnoyarsk, hoping to remain in the “city of childhood” forever. Here, in the “small motherland”, the depression recedes. Surikov’s brother almost forcibly forces him to start writing “The Taking of the Snow City”. Surikov enjoys the work, and in the autumn of 1890 returned to Moscow. The entire period of the 1890s is marked by a new substantive and coloristic search – and, of course, by new pictorial masterpieces, always exhibited among the “Itinerants”. During this and the following decade, Vasily Ivanovich traveled extensively and often. He visited Siberia, the Crimea, the Oka and the Volga. He visited Spain, Switzerland, Italy and France. At the end of his life Surikov remained fascinated by grandiose ideas. But, unfortunately, “The Krasnoyarsk Riot”, “Pugachev”, “Princess Olga” remained unfinished. While on vacation and receiving medical treatment in the Crimea in 1915, Surikov painted his last self-portrait, which serves as a fitting illustration of the characterization given by Voloshin. The eminent Russian artist died on March 19 (March 6 – old calendar) in Moscow. Vagankovskoye cemetery was the artist’s last resting place. 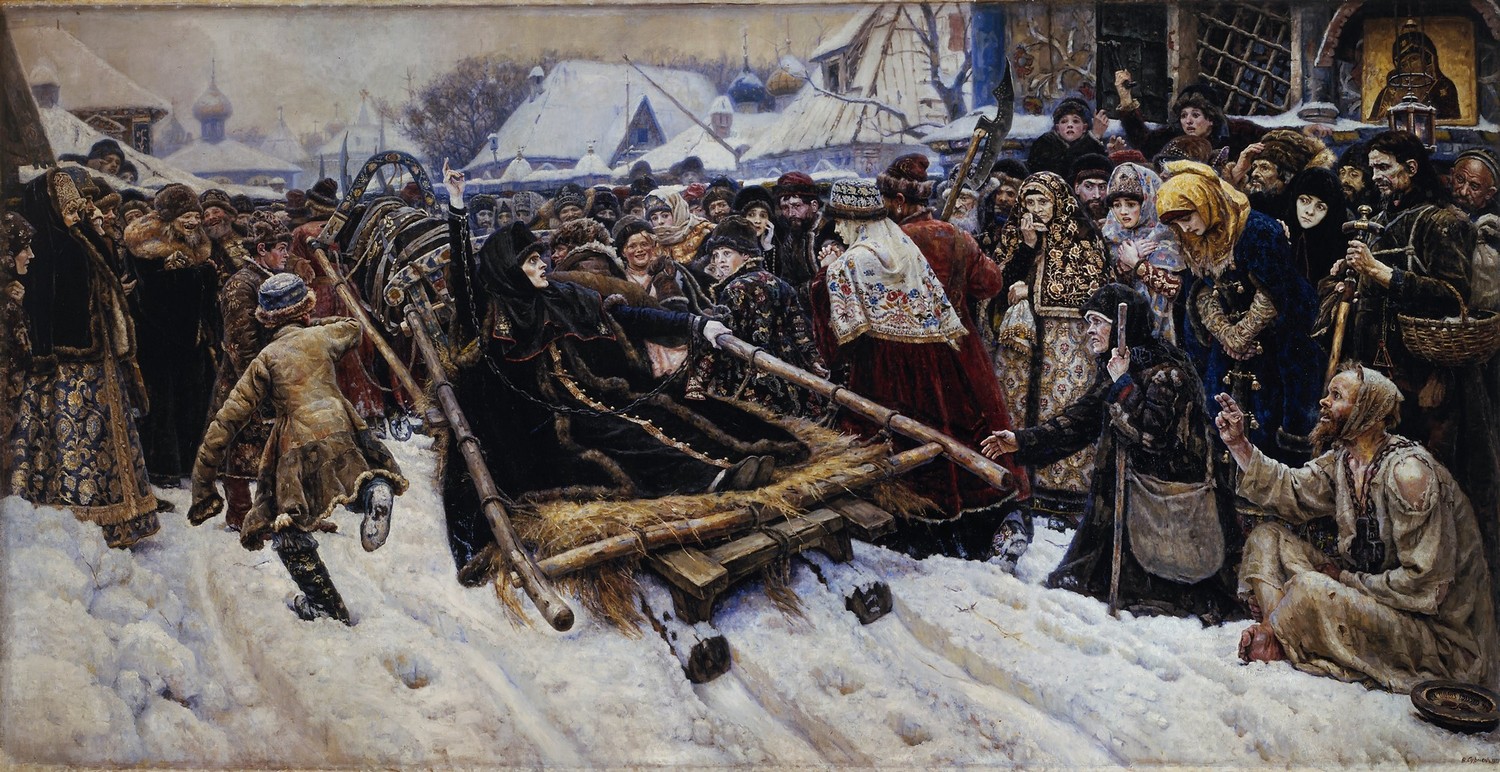 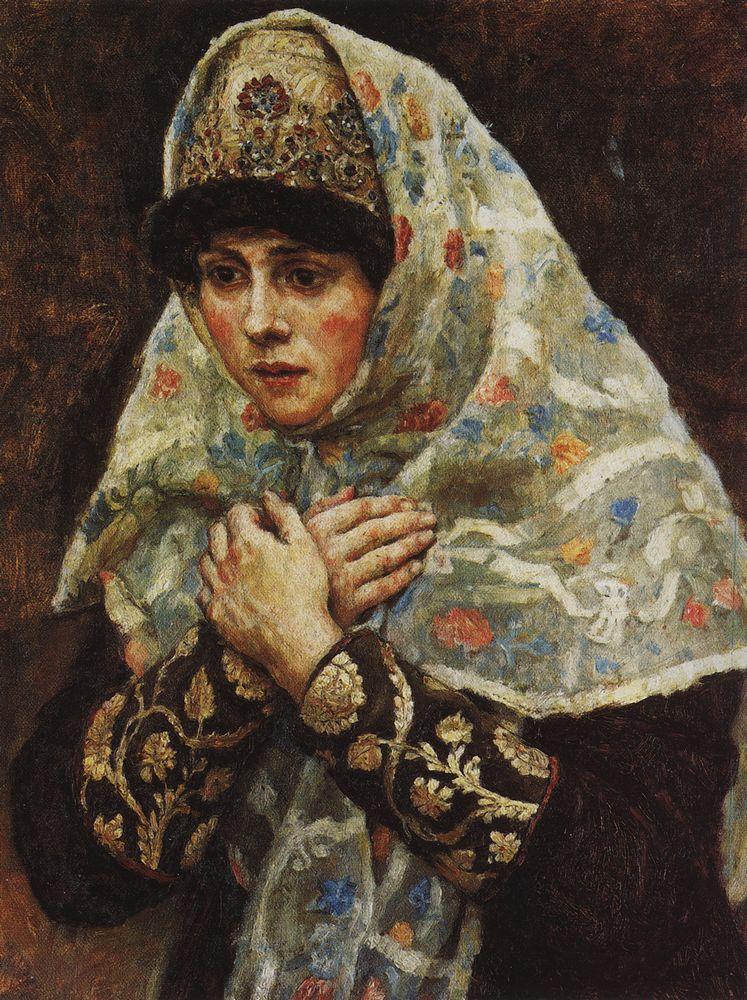 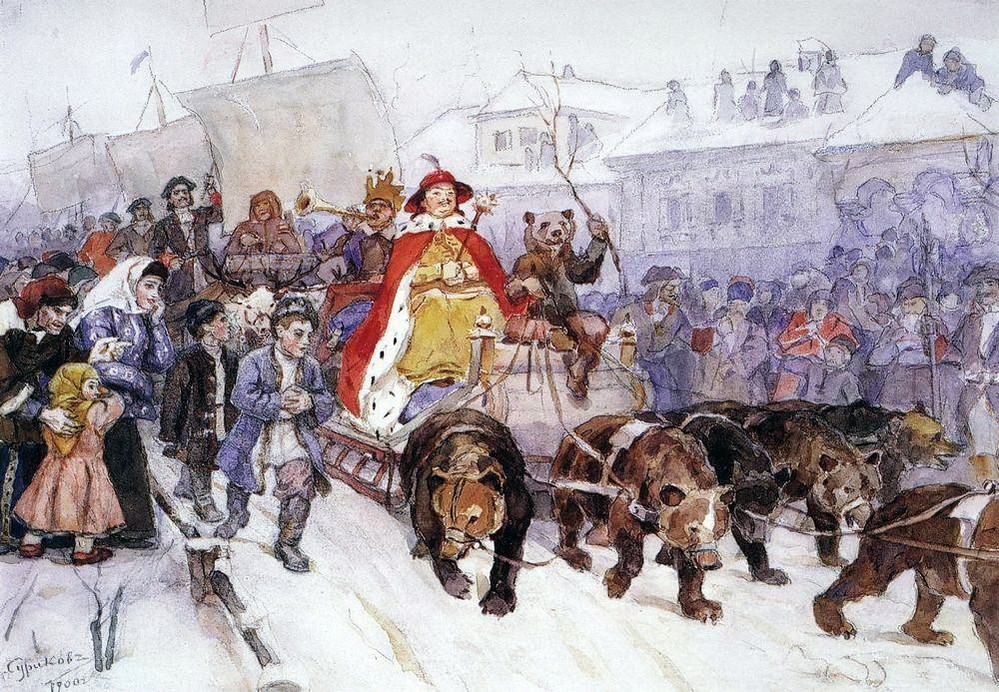 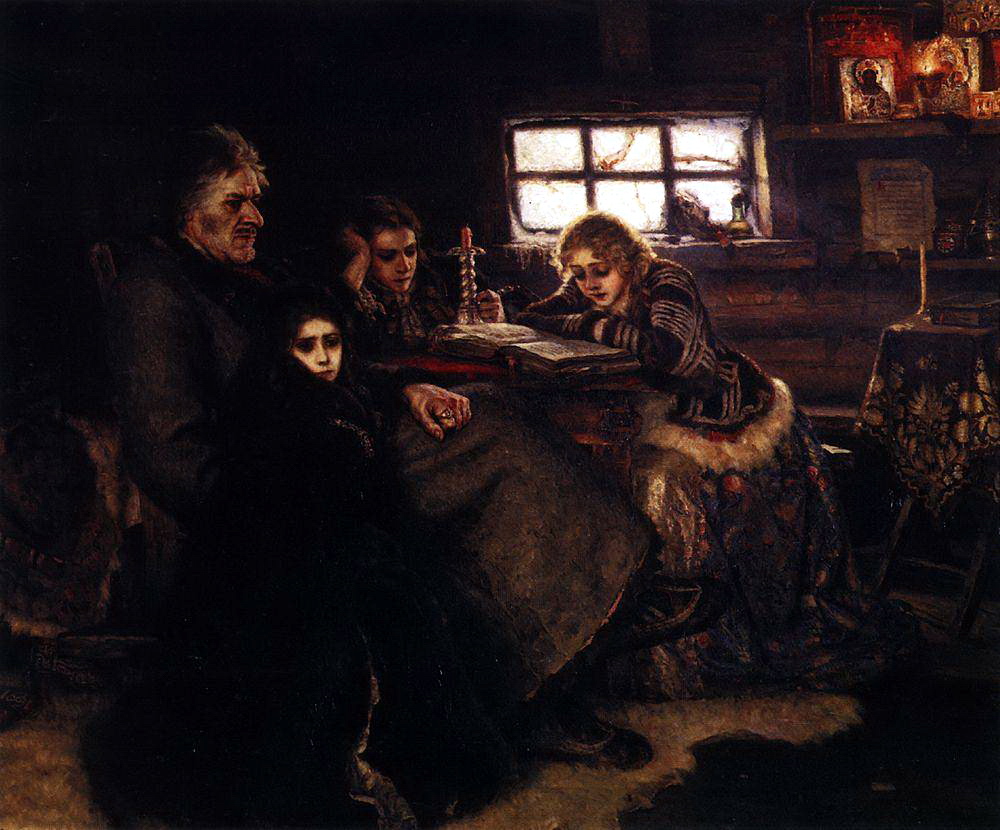 Suvorov’S Crossing Of The Alps 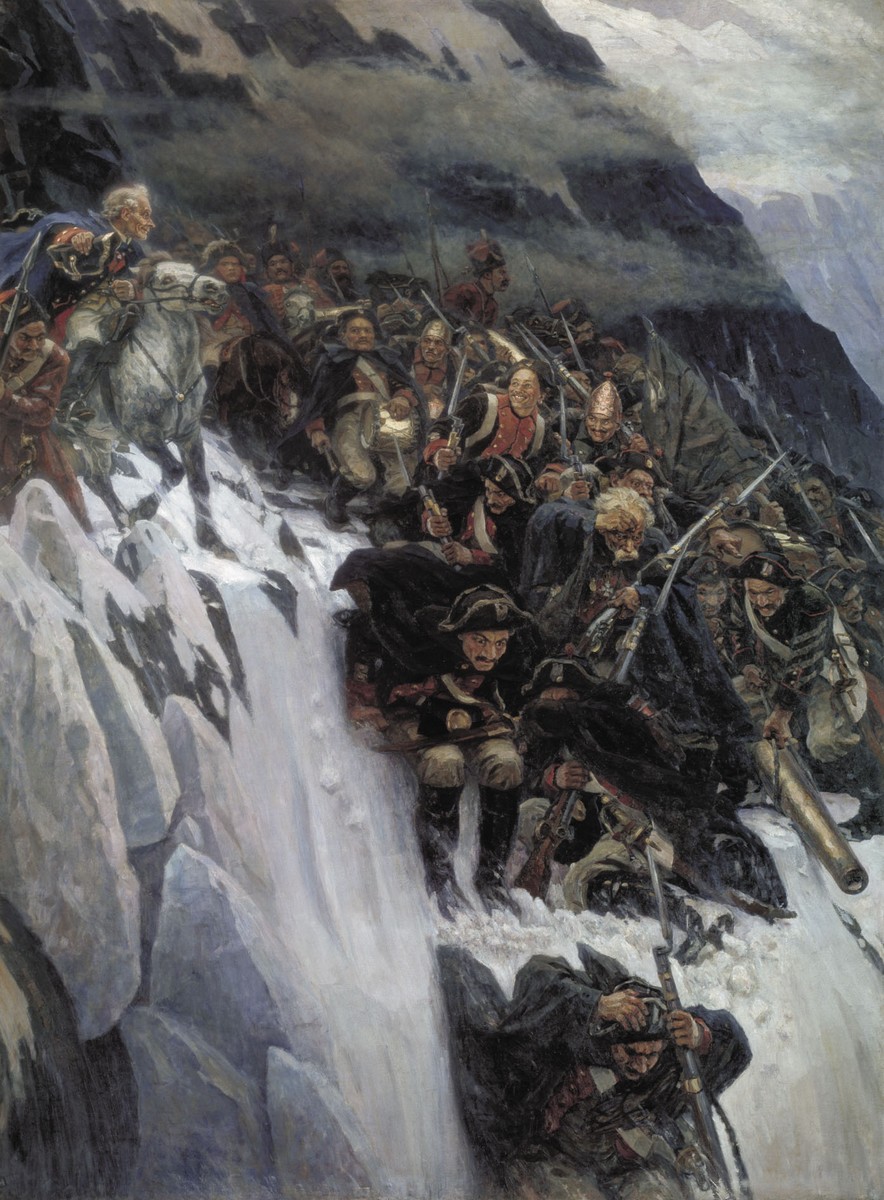 View Of The Monument To Peter The Great On Senate Square 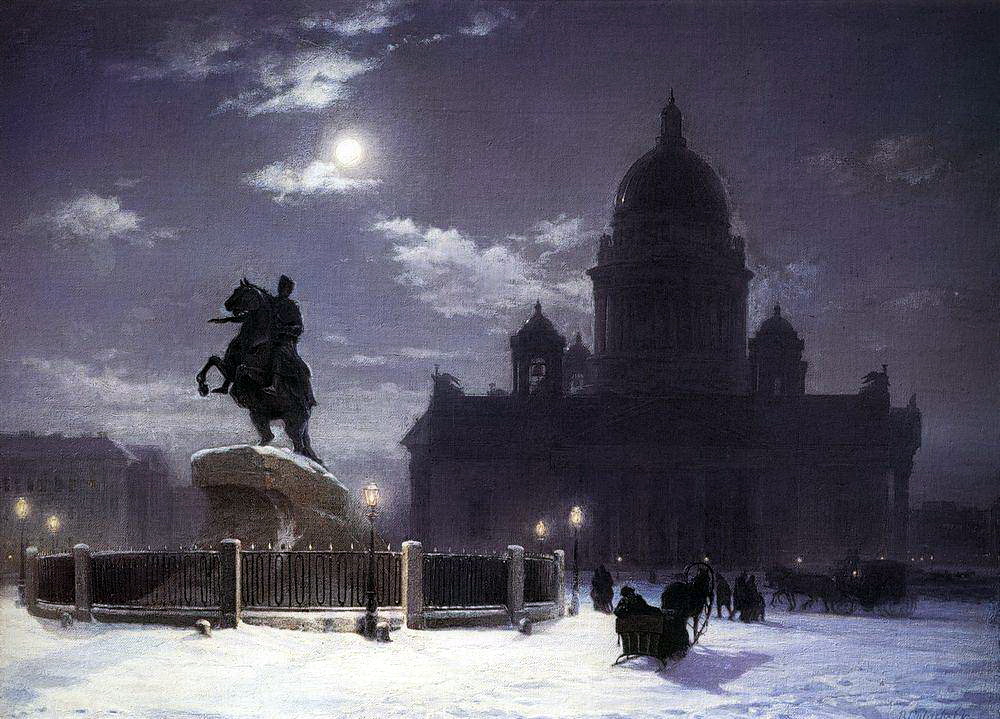 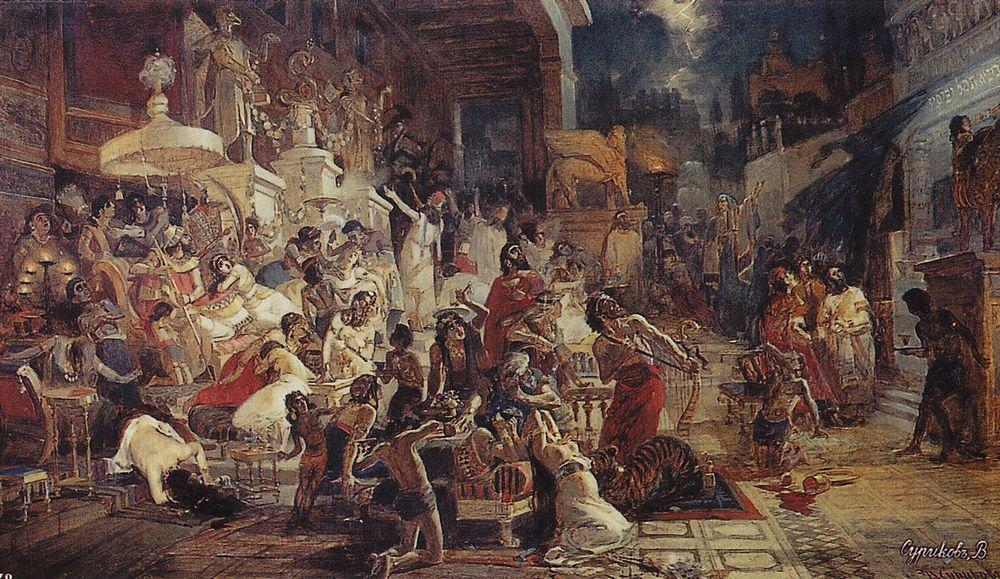 Conquest Of Siberia By Ermak

The Tsarina’S Visit To A Nunnery 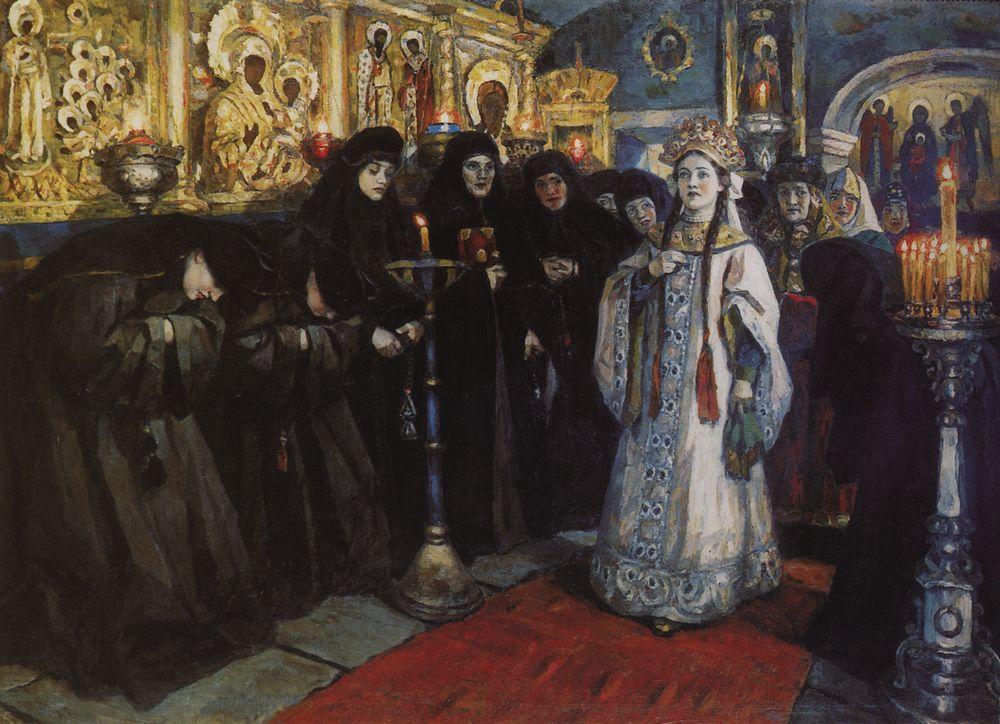 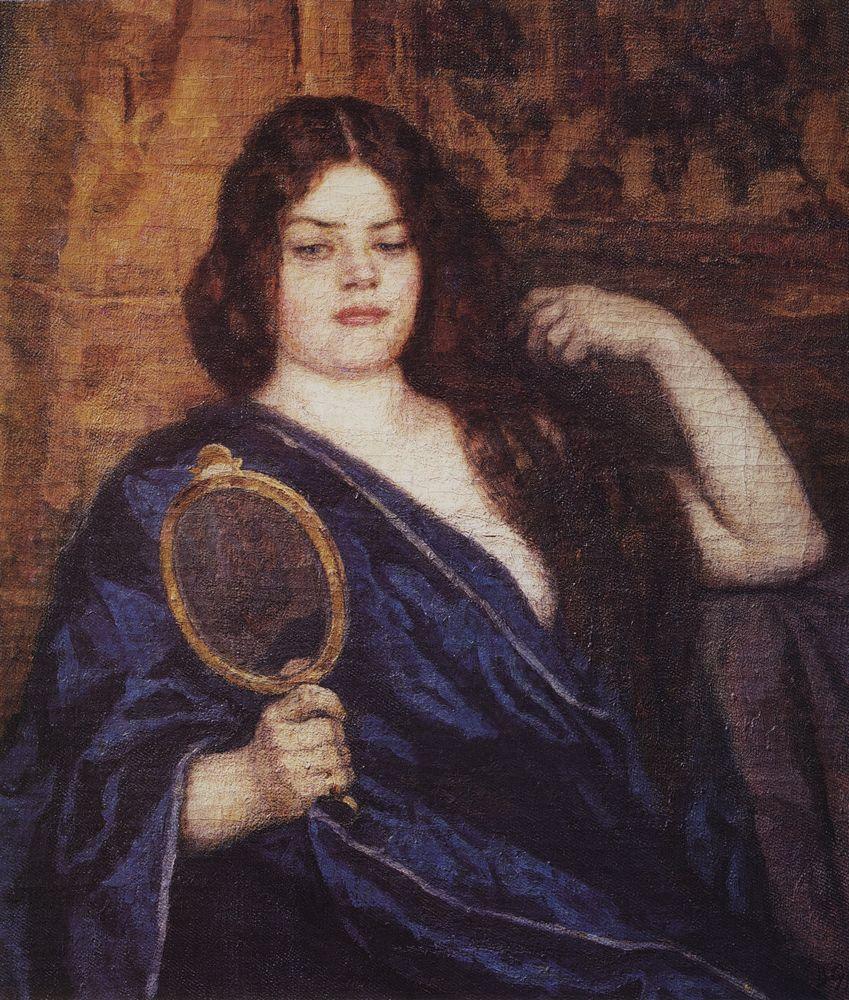 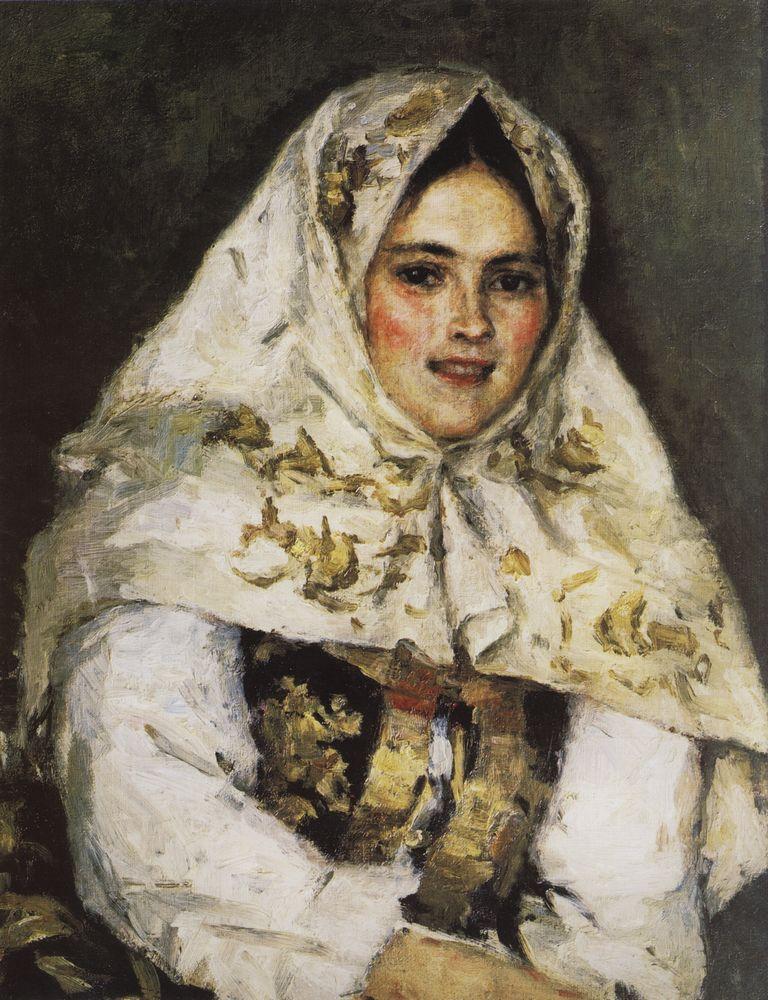 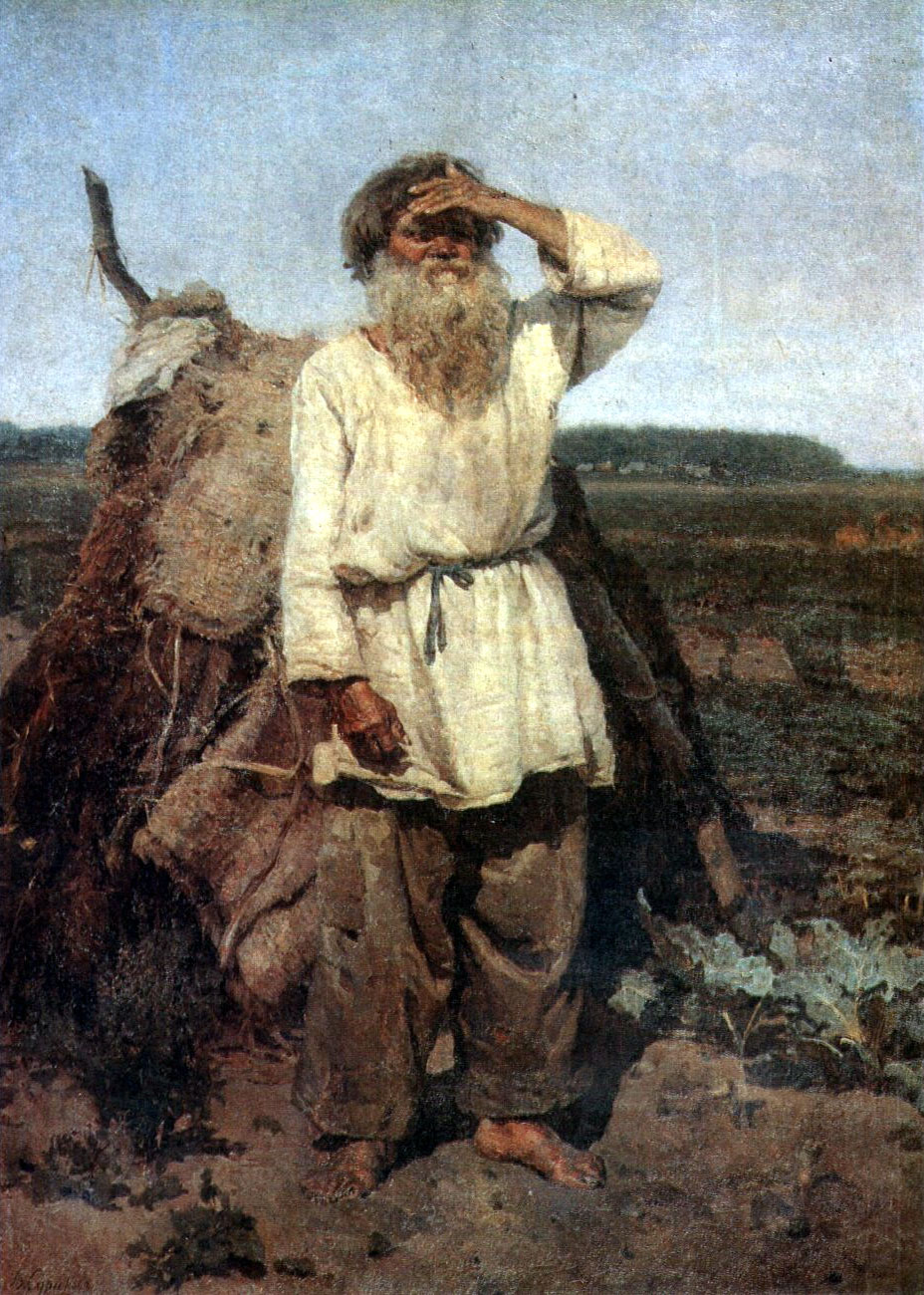 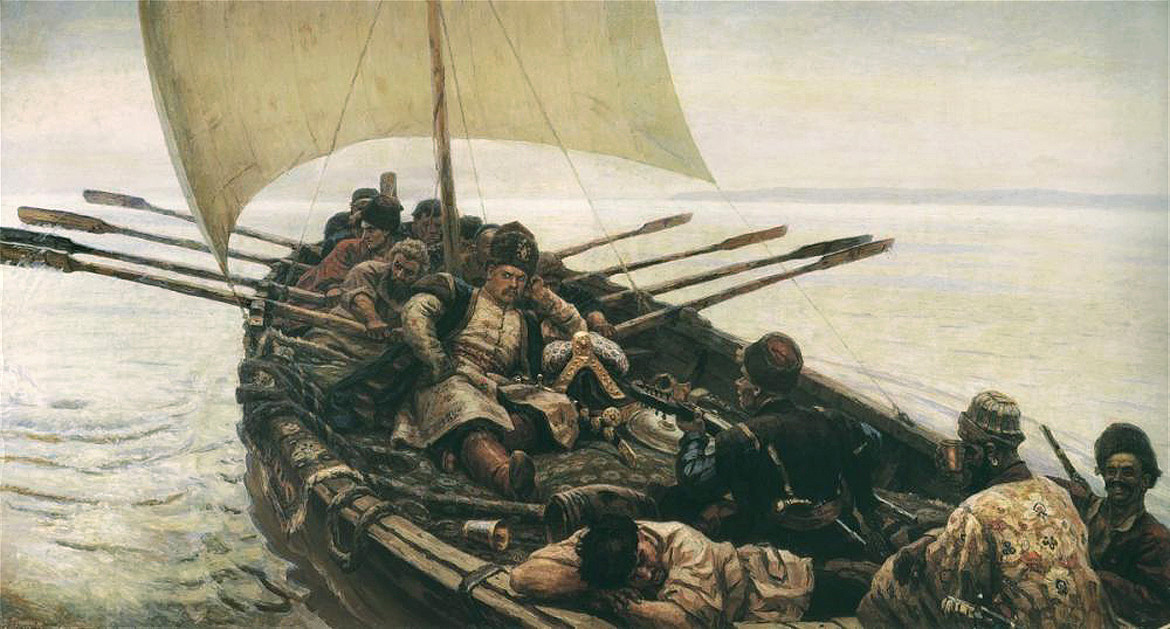 The Morning Of The Streltsy Execution 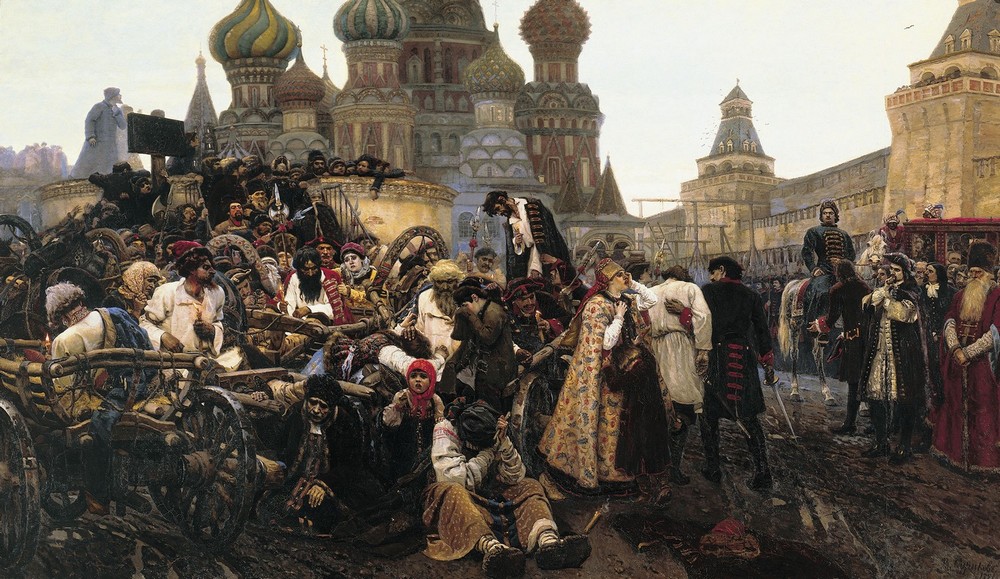 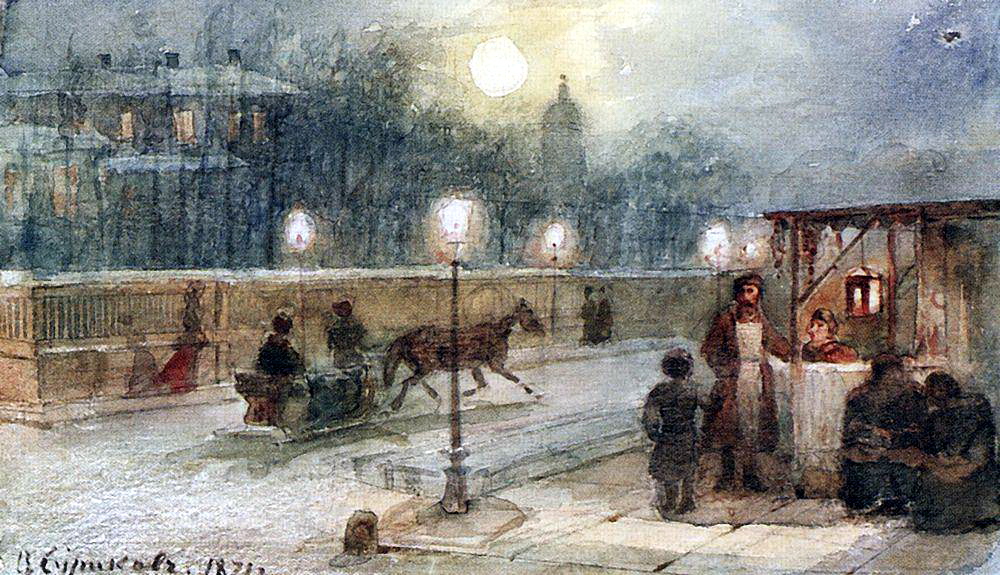 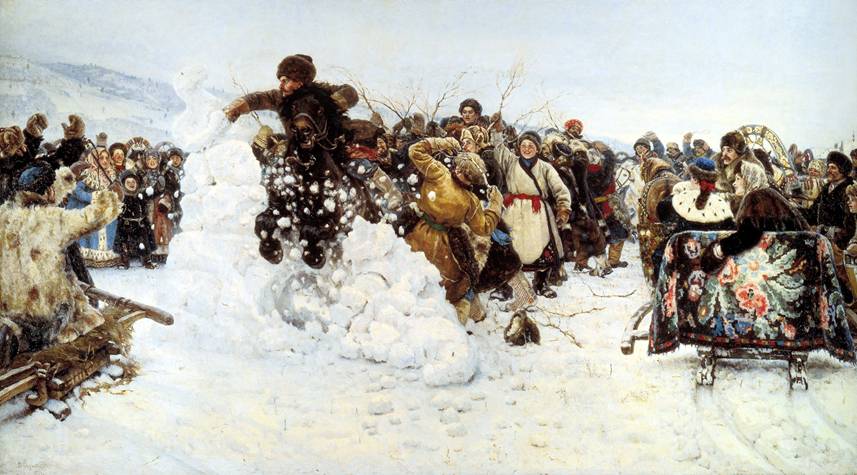