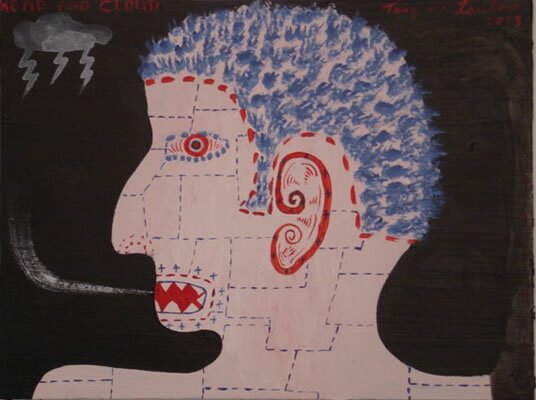 TONY DE LAUTOUR, born 1965 in Melbourne
De Lautour has lived in Christchurch for most of his life. He graduated Bachelor of Fine Arts (majoring in sculpture) from the University of Canterbury School of Fine Arts in 1988 and in 1995, just one year after his first solo exhibition, he won the Visa Gold Art Award. His paintings from that first exhibition, ‘Bad White Art’, were deliberately naive and included imagery reminiscent of the seedy side of prison and gang life – drugs, syringes, booze, tattoos of skulls, tears and ‘love-hate’, and the violence of knives and guns. Images of a kiwi and a lion represented symbolically the debate over colonisation and republicanism, and these appeared again in his ‘Revisionist’ series of 2000, placed in the existing landscapes of paintings de Lautour had found in second-hand shops or garage sales. These he reworked to create narratives of quirky humour and irony, giving the old, traditional, mass-produced paintings newly-relevant life.

In the early 2000’s he played with well-known symbols, and appropriated logos of prominent corporations within his paintings. Clues to meaning could be found in the smallest detail. Logos (e.g. of major sports brands, food chains, etc.) were depicted as ‘mountainscapes’ on black backgrounds, perhaps to demonstrate the colonisation of New Zealand by big business.

De Lautour’s art is quirky and full of dark humour. His paintings have been included in numerous group exhibitions in public galleries, and Te Manawa (Palmerston North), The Waikato Museum of Art & History in Hamilton, and the Govett-Brewster Art Gallery in New Plymouth, have held solo exhibitions of his work.