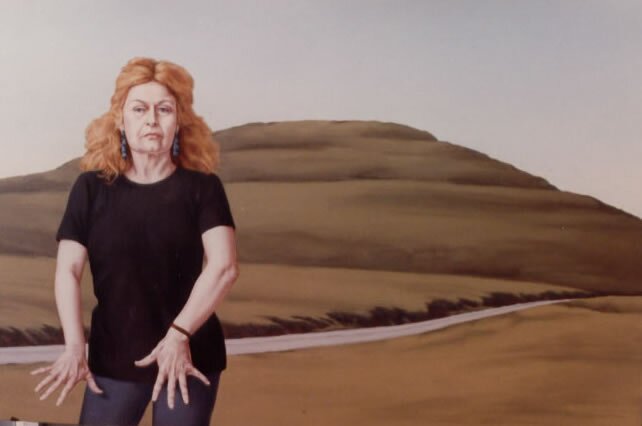 MARY MCINTYRE, born 1928, Auckland
A self-taught painter, McIntyre has been a full-time artist since 1980, and is well-known for her realist works in which she creates ambiguous, often surreal, narratives. One of New Zealand’s foremost realist, figurative painters, she has a reputation for producing works that defy political correctness and usually contain barbed humour or shafts of discomfort.

Her knowledge of and interest in musculature and anatomy has been lifelong and she has the ability to render portraits with accuracy, capturing the essence of her models, particularly when she knows them well. She frequently paints herself as the protagonist in her works, the first such series being ‘Identity Parade’ in which she superimposed her face on the muscular figures of posing body builders. Over the years, we have observed her progress through life, from young bride to grandmother, in a string of works in which she has used herself as model.

McIntyre’s paintings depict with honesty what she sees. Through her own portraits we watch the aging process as she documents it. Her paintings of nudes do not conform to the ‘ideal’ stereotype of the lithe, young model, but portray women of all shapes and sizes. Her vision is clear-sighted. Sexuality is a recurring theme in her work and, she believes, is an under-acknowledged and important influence in our lives.

McIntyre’s 2002 exhibition in Auckland was ambitious and successful. It included a painting divided into almost 100 separate, stand-alone images, many of which in some way spoke of her life. Hanging from the ceiling was another ‘multiple’ work, comprised of exquisitely drawn images set in plastic envelopes. The paintings, brought together from different periods in her life, showed a history of strong, uncompromising imagery with that unmistakeably McIntyre sense of humour.