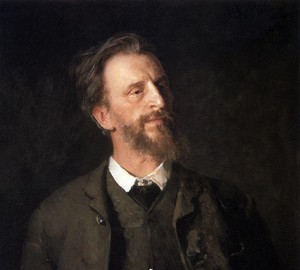 Grigory Grigoryevich Myasoedov was born on April 7 (O.S. 19), 1834 in the village of Pankovo, Tula province (now Novoderevenkovsky district of Orel region), in the family of a petty nobleman. His father tried in every possible way to encourage the boy, who was early interested in painting. His studies Grigory Myasoedov started in the Orlov gymnasium, where he took lessons in drawing from I.A. Volkov. In 1853 the young man moves to St. Petersburg and enters the Academy of Fine Arts, where his teachers were T. Neff and A. Markov. The years of the artist’s studies coincided with the crisis that befell the educational institution, which was finally resolved by the ‘revolt of the fourteen’. However, Myasoedov did not witness the riot itself, as he had already finished his studies. In 1861, while still a student, the young artist created a painting called “Congratulations to Young People,” for which he was awarded a small gold medal. And the following year, 1862, he was awarded a large gold medal for his painting “The Flight of Grigory Otrepiev”. VV. Stasov referred to these works as one of the first steps towards the development of historical realism in Russian painting. In the future, the historical genre will be present in the work of the artist constantly. After graduation from the Academy of Fine Arts, Myasoedov went abroad as a pensioner. The artist worked in Florence, Rome, Paris, Spain. His most famous works created during this period are “Francesca da Rimini” as well as “Funeral at the Spanish Gypsies. In 1869 Myasoedov returned to Russia. Soon he was awarded the title of Academician for his painting “Spells”. While he was still in Europe, the artist conceived the idea of establishing the Association of Itinerants, which eventually led to the organization of the first meeting of its members in late 1870. In November 1871, the first Itinerant Exhibition was opened in St. Petersburg, which later was shown in other cities: Kiev, Moscow and Kharkov. At this exhibition he presented his work “Grandfather of the Russian Navy”, created in 1871. In the spring of 1872 he had his second exhibition, where he showed his famous painting “Zemstvo Lunch”. Grigory Myasoedov showed great interest in peasant life. And if the painting “Zemstvo Lunch” is aimed acutely critical, his other works tell us about folk beliefs and rituals (“Drought,” 1878-1880; “Plowing,” 1876), the joy of peasant labor ( “Kosci”). Plots of historical genre were embodied in the paintings “Reading of the Statute of 19.02.1861” (1873). (1873) and “Self-Assassination” (1884). The artist was no stranger to landscape painting, his paintings, written in this genre, distinguished by the expressiveness of motives and at the same time the simplicity (“The Road in the Rye”, “Twilight”, “Rocks Gurzuf”, all painted in 1881). Sometimes Myasoedov wrote portraits, but still can not call it portrait painter. The last years of his life Myasoedov spent near Poltava in a large estate Pavlenki with a park, pond and garden. Here he organized a school of drawing and created scenery for the local theater. Grigory Myasoedov died in December 1911.

The Flight Of Grigory Otrepiev 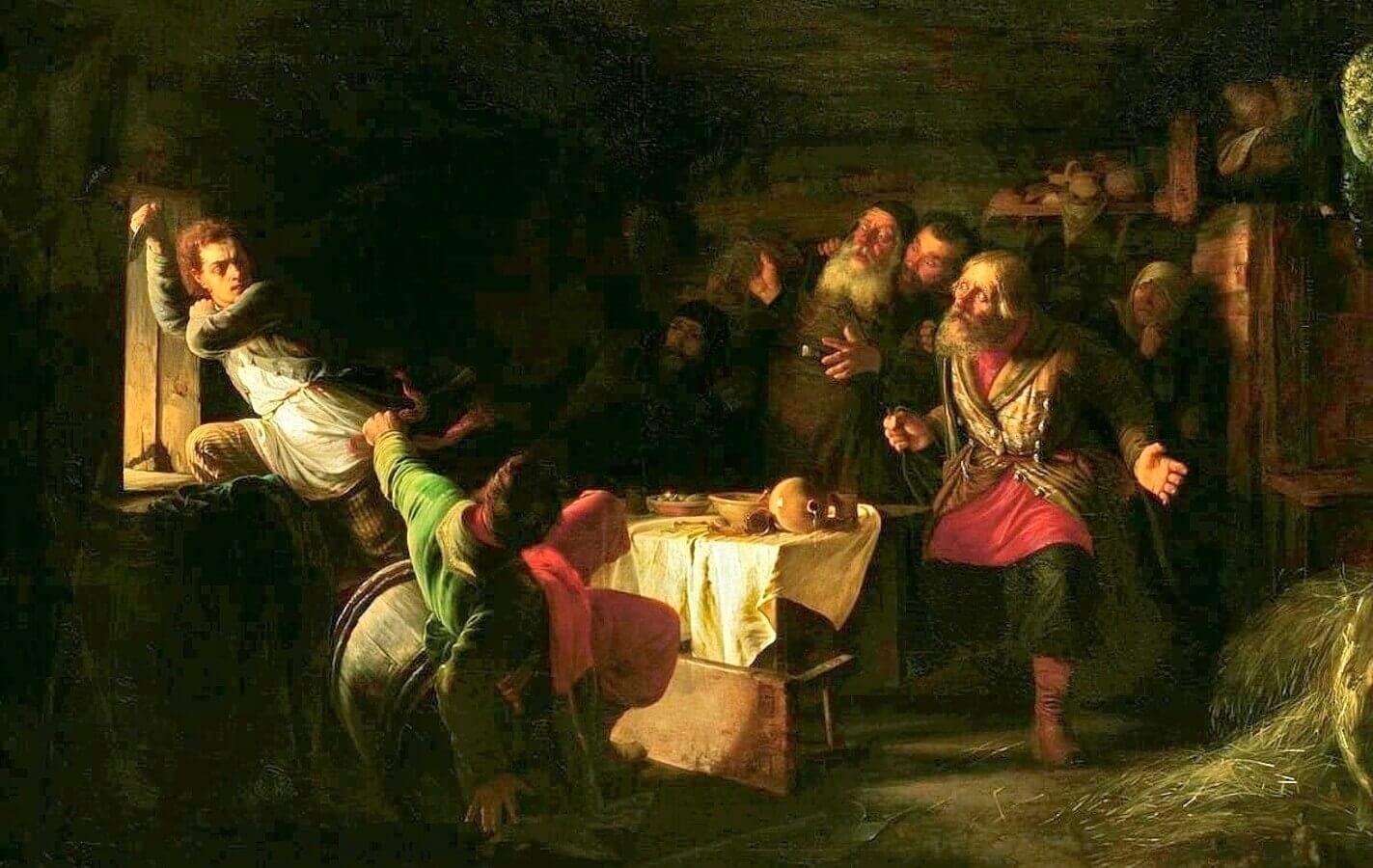 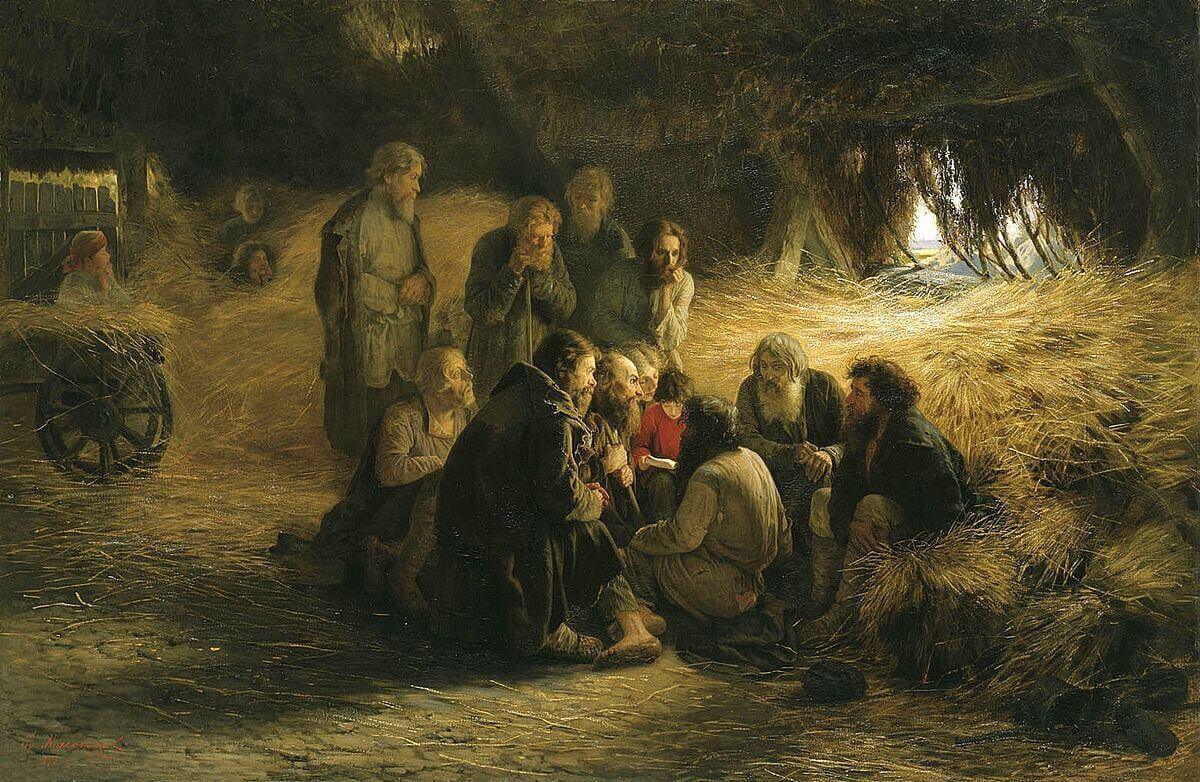 Grandfather Of The Russian Navy 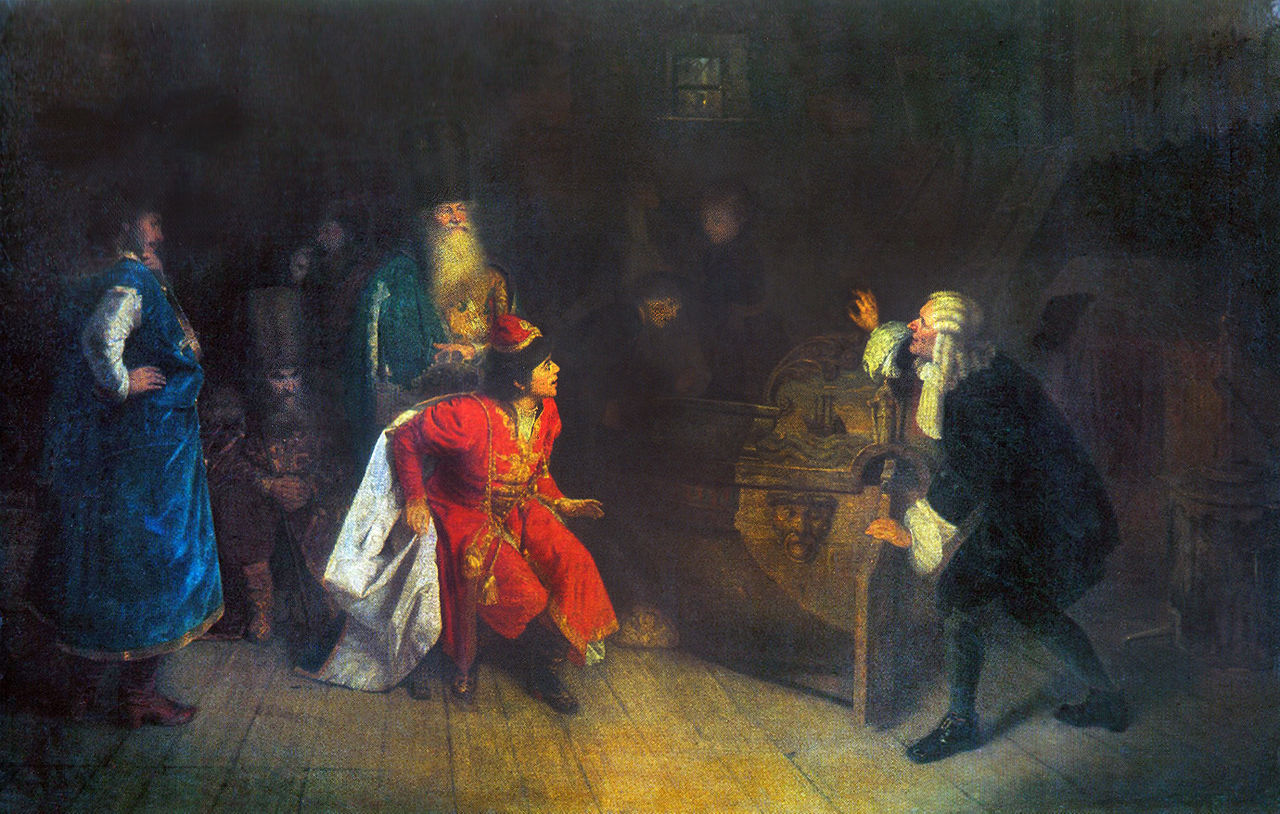 The Road In The Rye

The Pier In Yalta 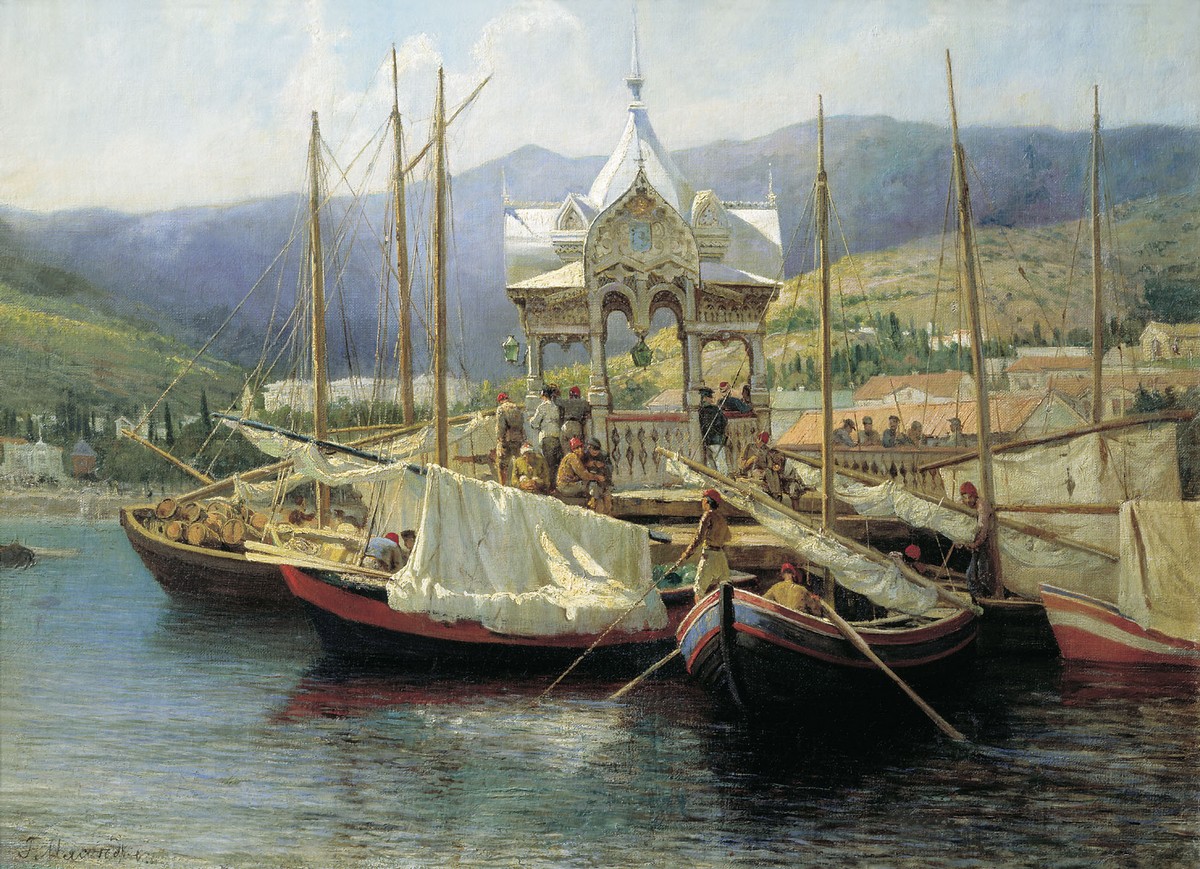 Prayer In The Field For Rain 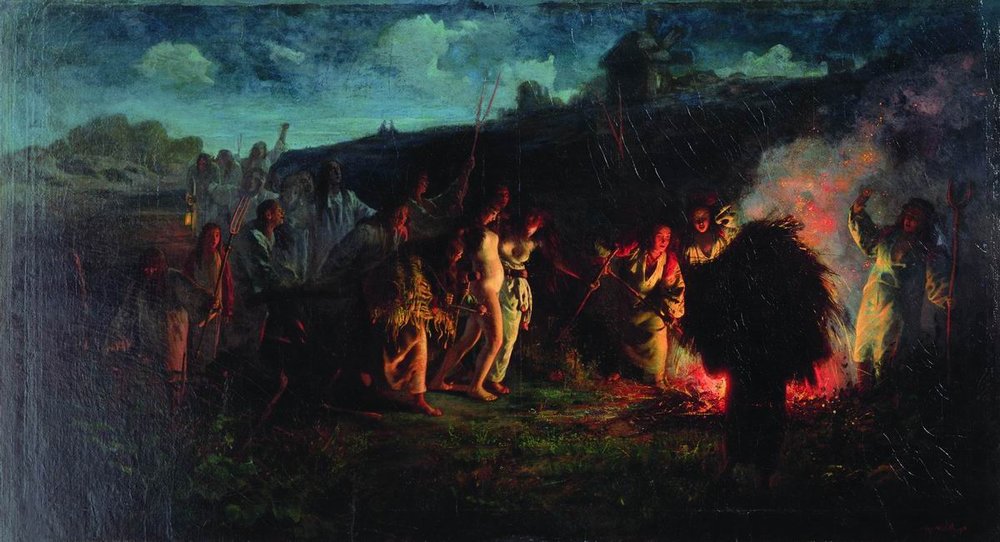 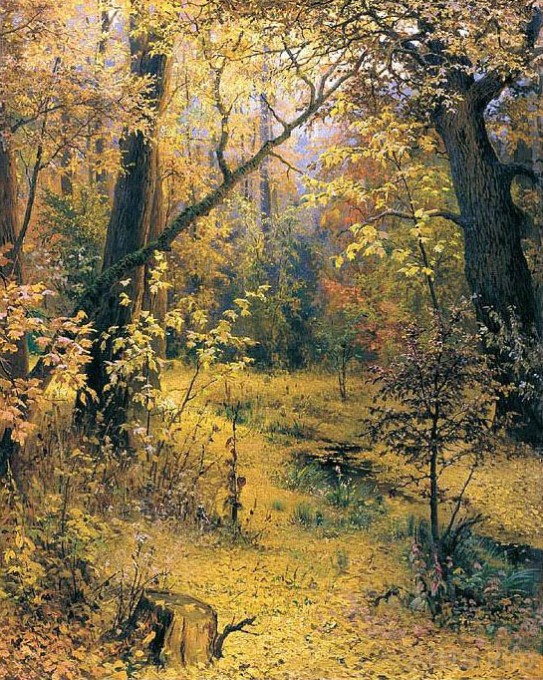 Autumn View In The Crimea 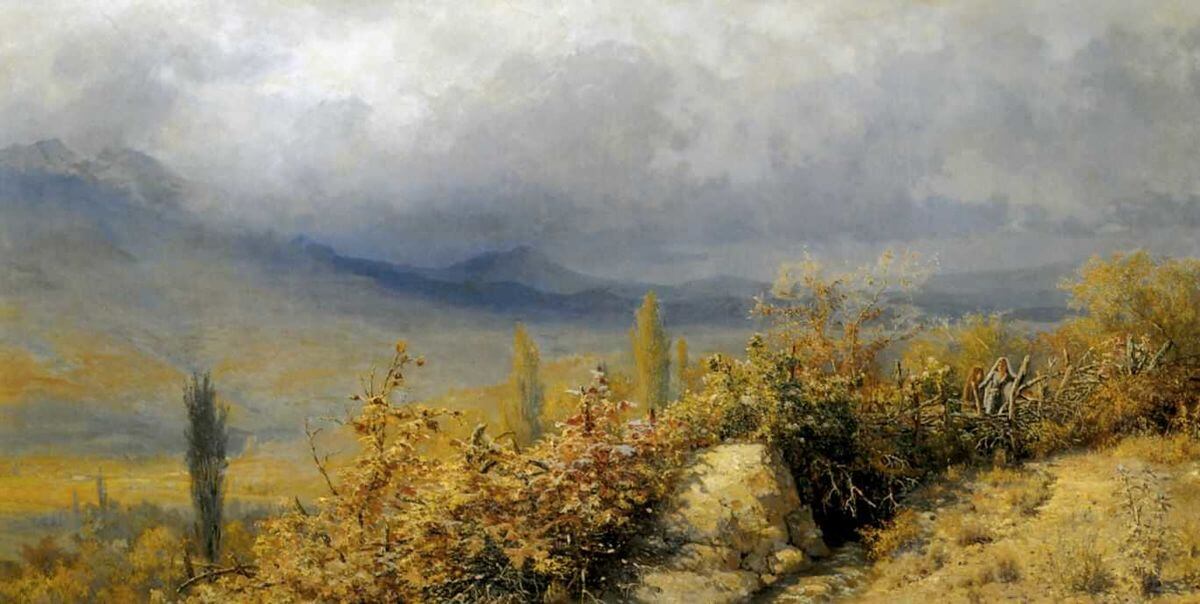 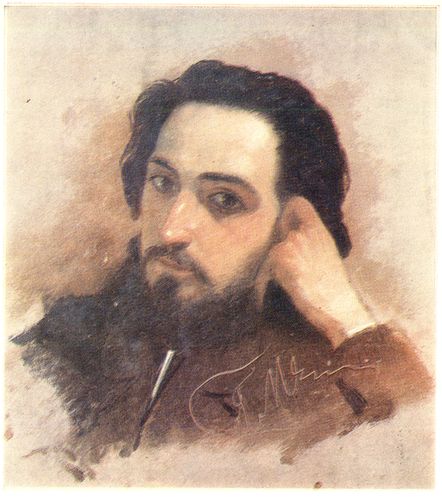 Congratulations To The Young People At The Landlord’S House 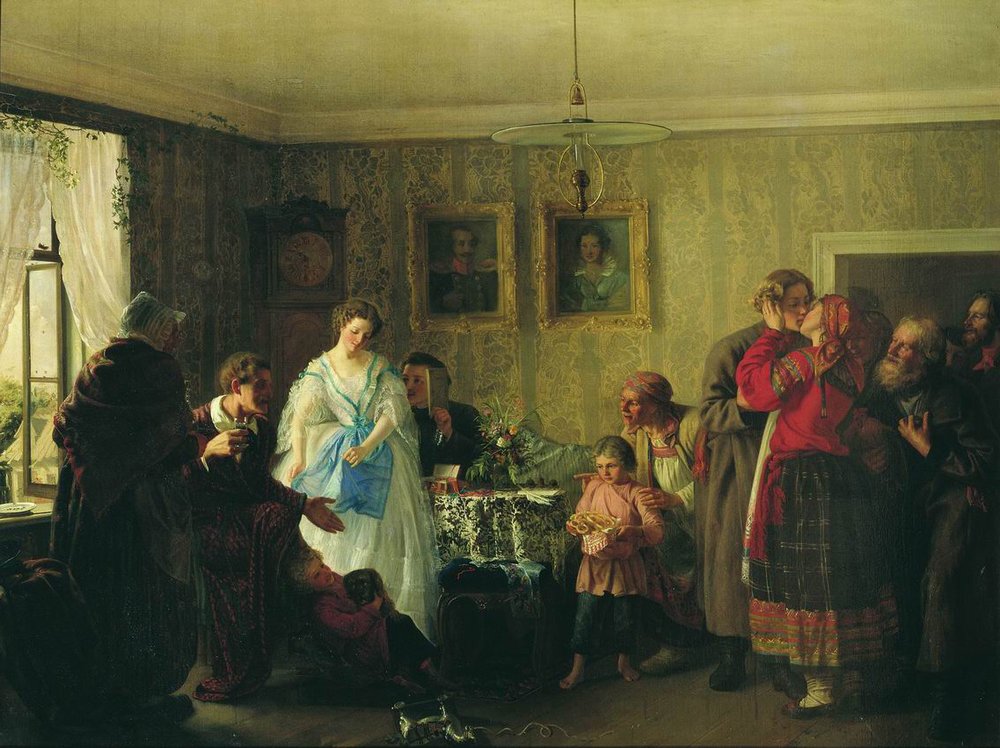 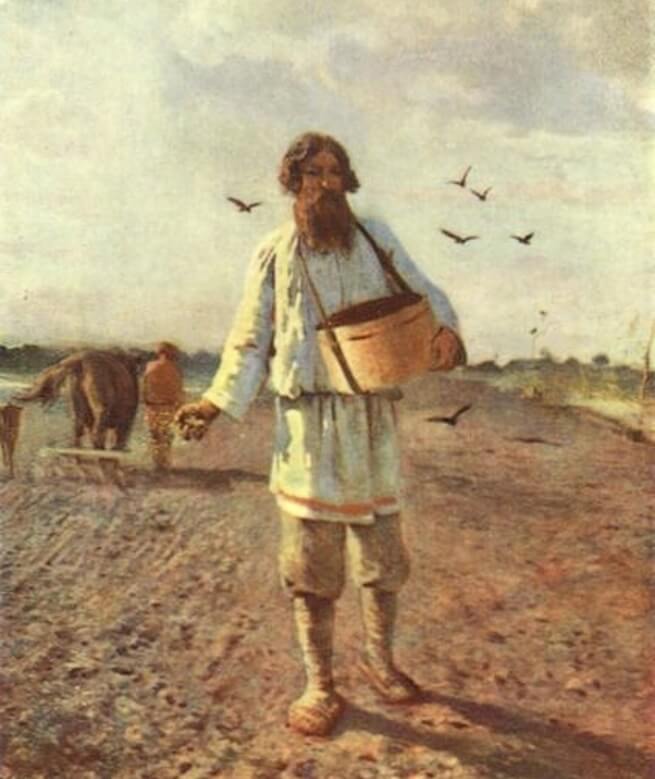 Myself, Or The Game Of Chess 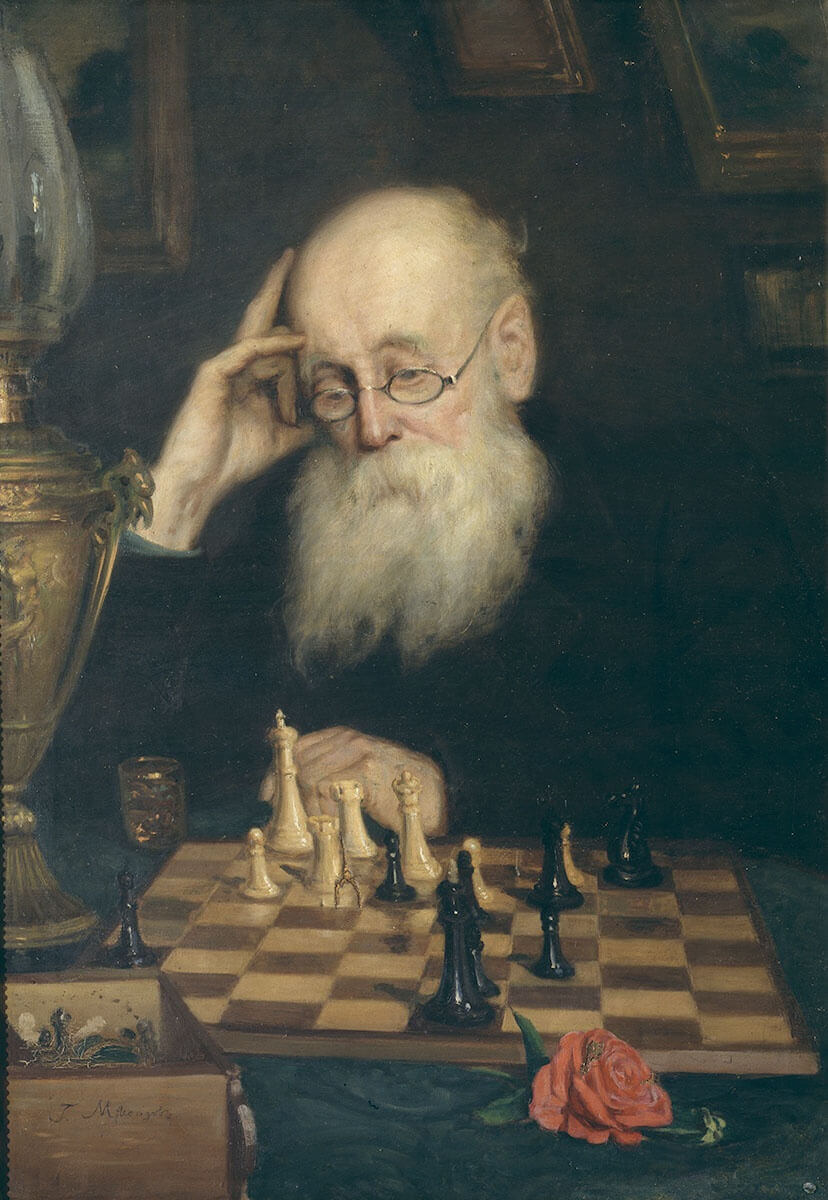 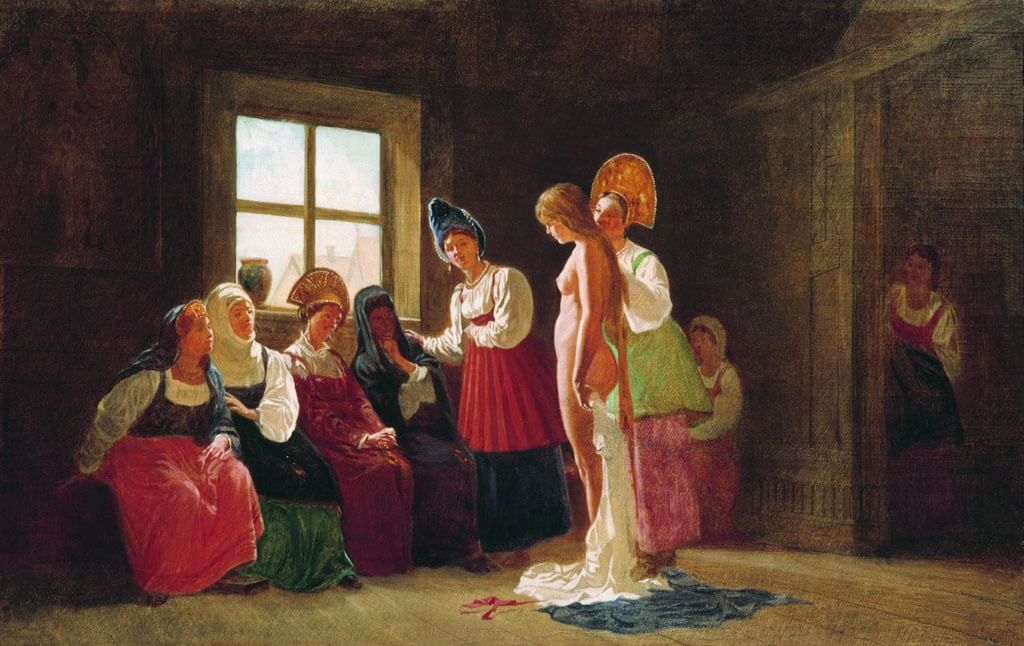 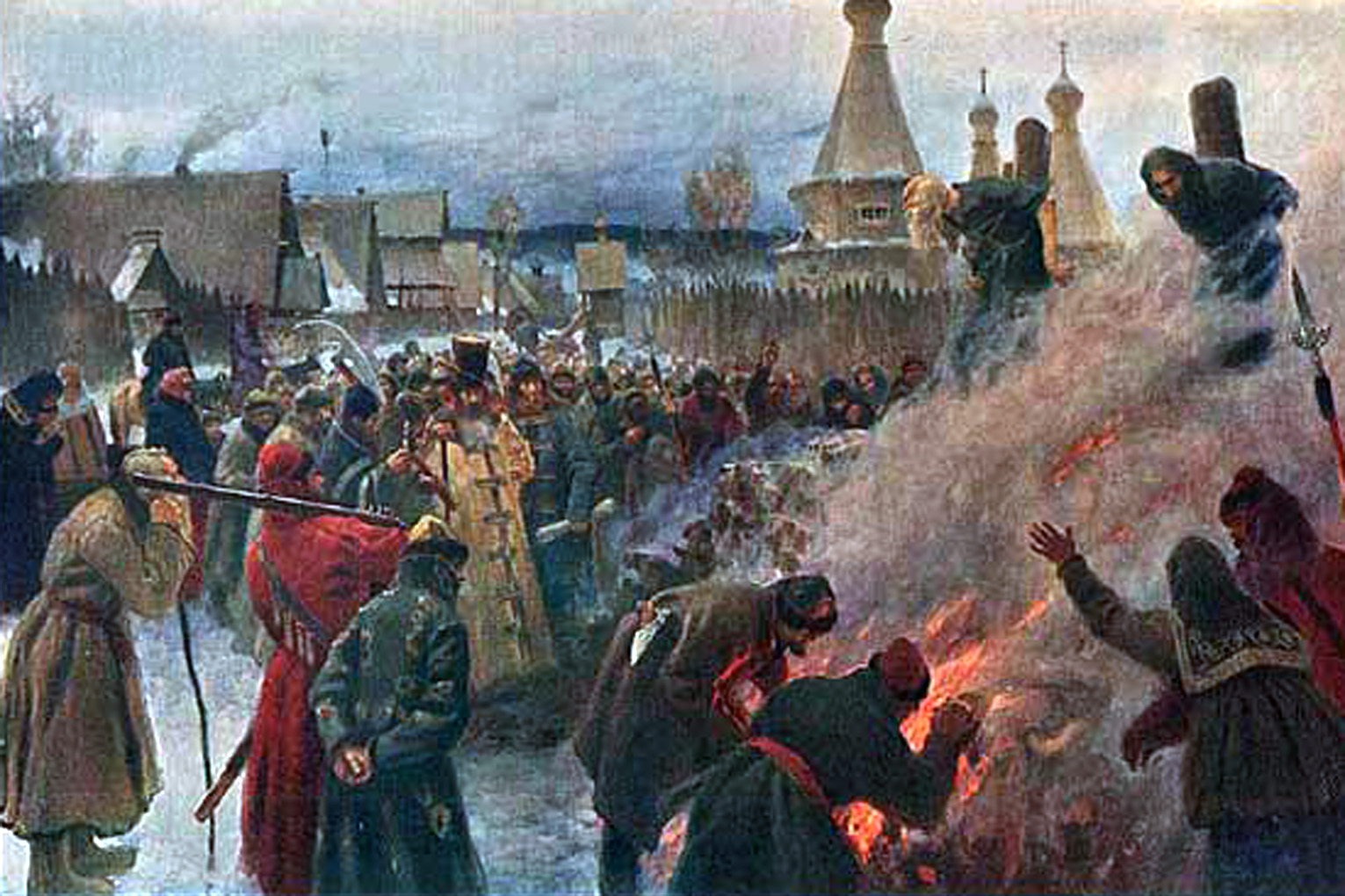 Portrait Of An Old Woman 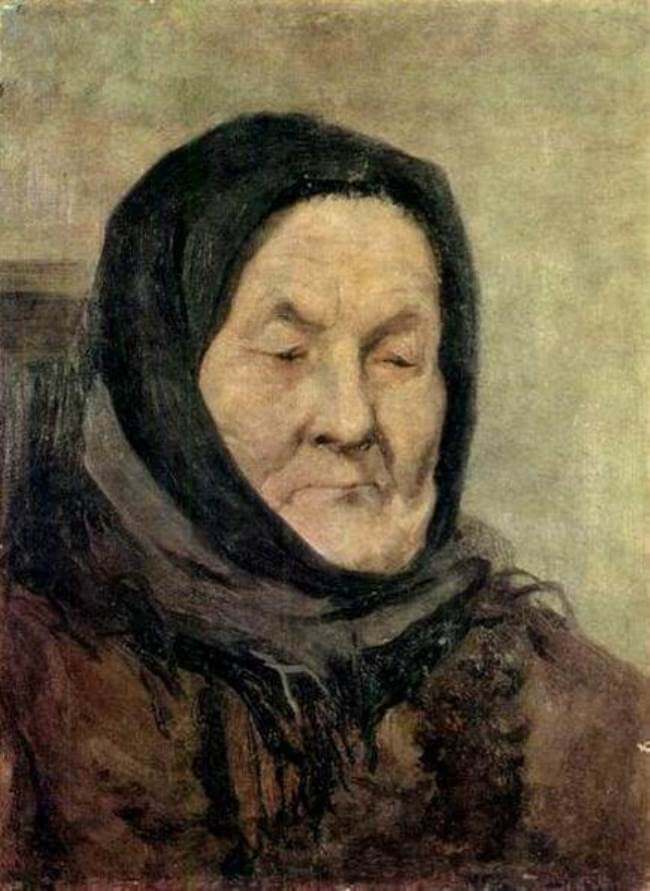 Three Sisters In The Park 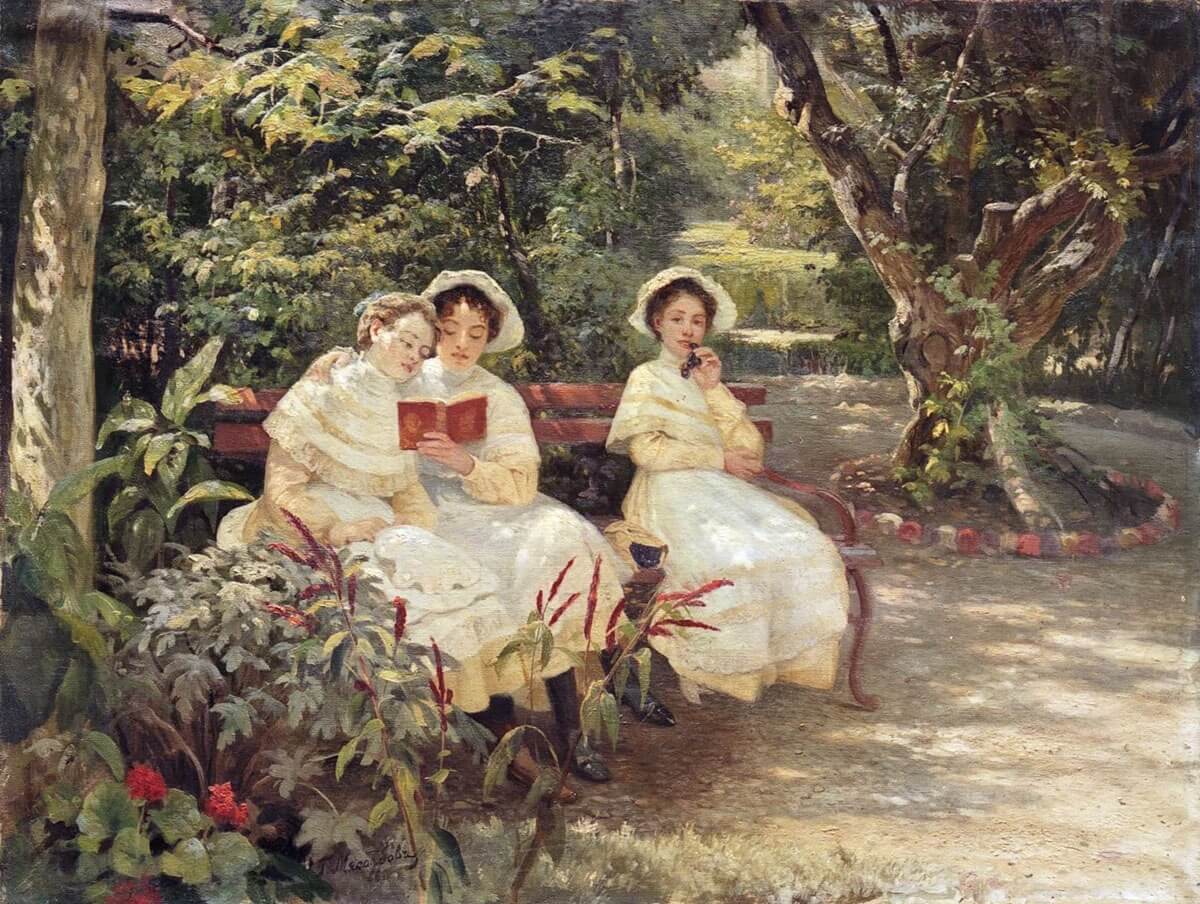 At Someone Else’S Happiness 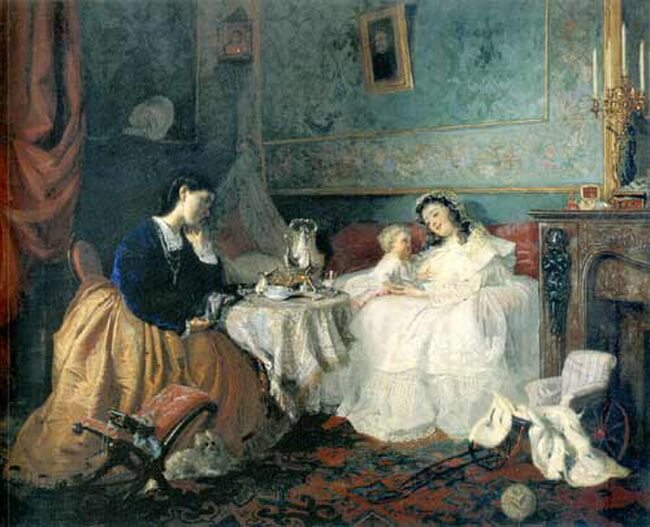 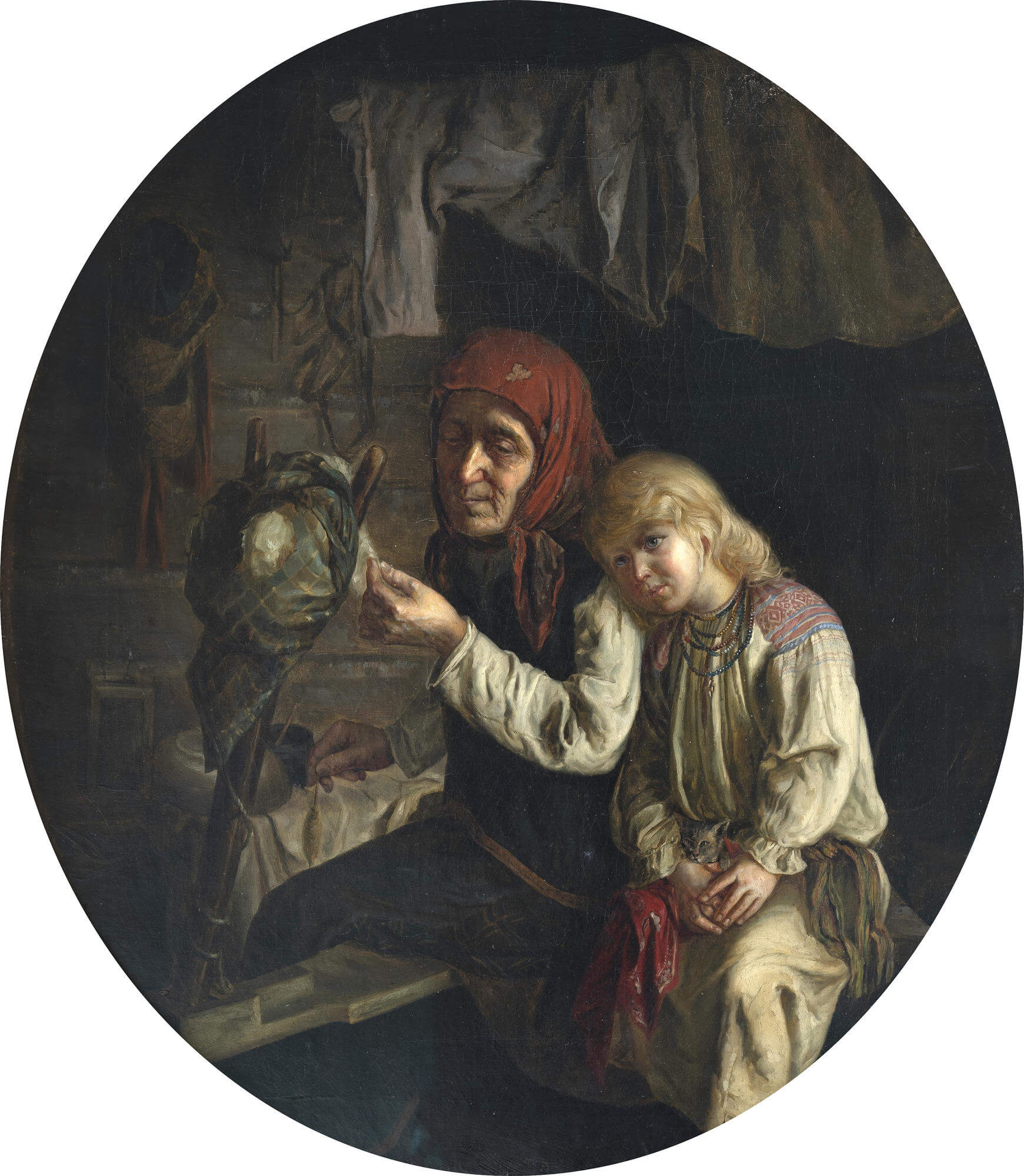 Portrait Of The Violinist Walter 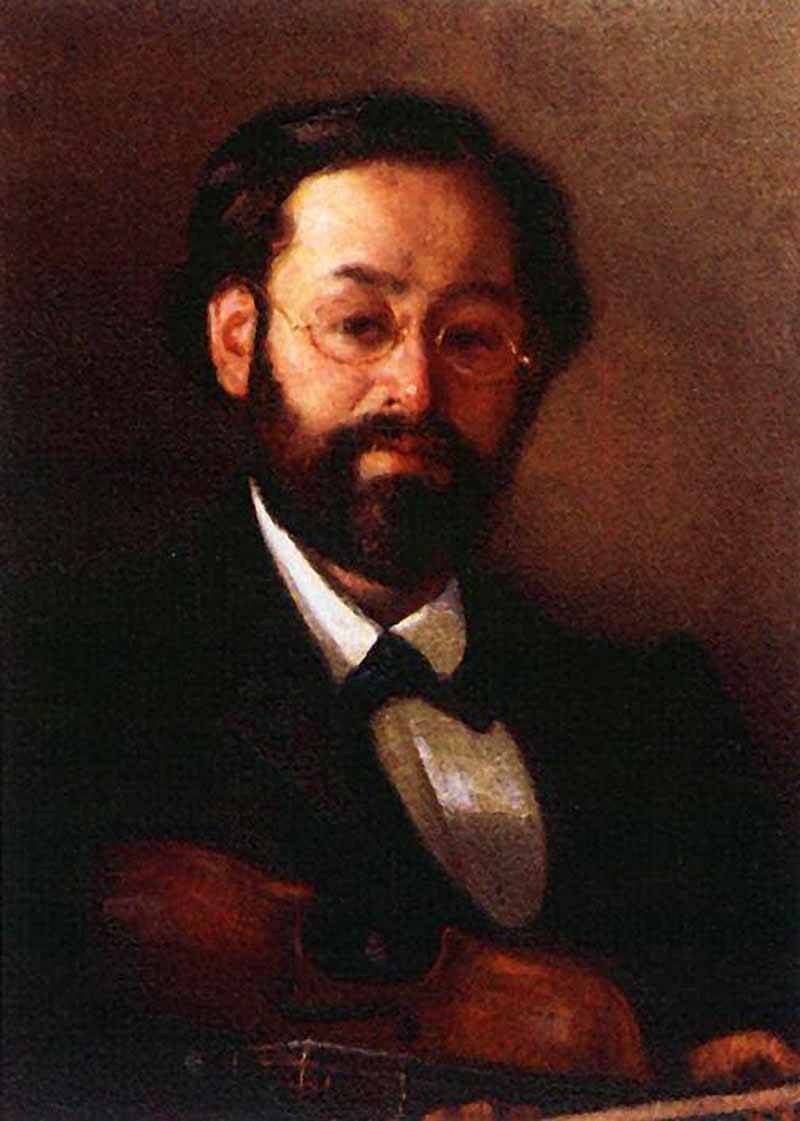 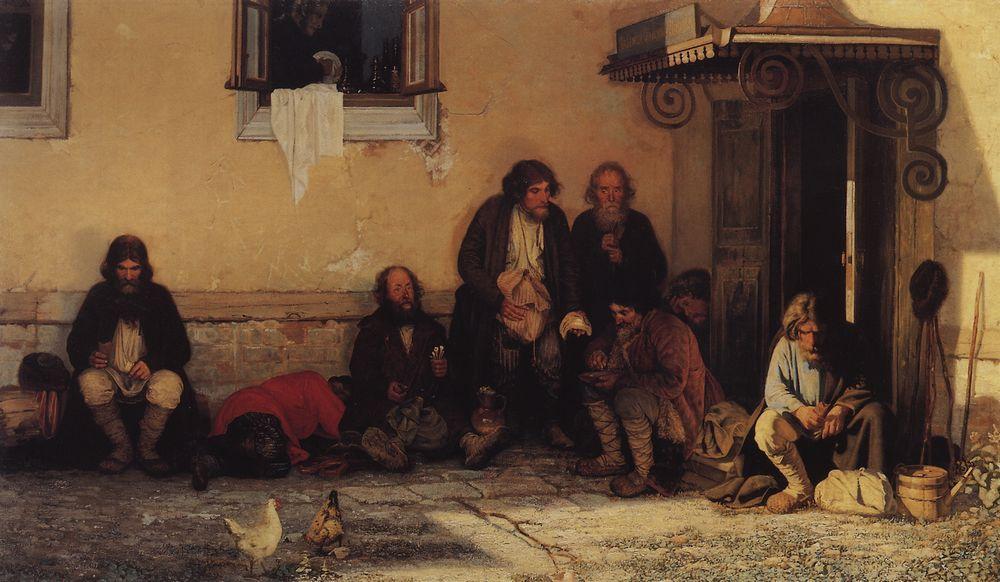