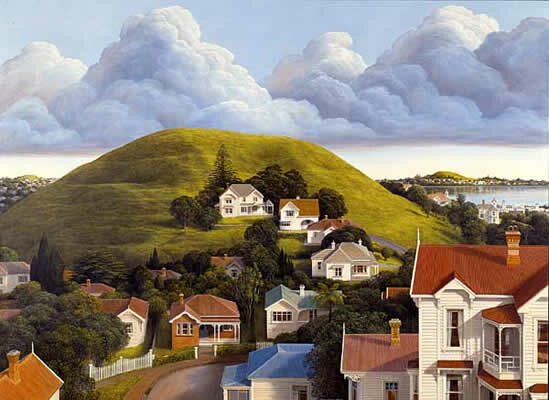 PETER SIDDELL, 1935 – 2011, Auckland
One of New Zealand’s most prominent realist painters, Peter Siddell is perhaps best-known for his unpopulated cityscapes which appear familiar, yet are not identifiable. He draws together different elements from a variety of sources to create timeless images of neighbourhoods that look uninhabited despite there being evidence of earlier human presence. These cities are clean, tidy, carless and unpeopled. The houses’ interiors, seen through clean windows, are empty. The presence of people is implied by such devices as a door left open, or a view that is placed immediately in front of the viewer. It is as if all the inhabitants of that city or neighbourhood have fled a plague, leaving their buildings in perfect condition. These scenes have been likened to a stage set between rehearsals.

Siddell has also painted New Zealand landscapes, including dramatic panoramas, throughout his career, and did include people in his early works. He exhibits solely with Artis Gallery, Parnell, Auckland and his exhibitions consistently sell out within days, such is his popularity.

For vast amounts of information, visit the excellent Siddell website – there you will find CVs, articles, reviews and images of works by both Peter Siddell and his wife, Sylvia Siddell.