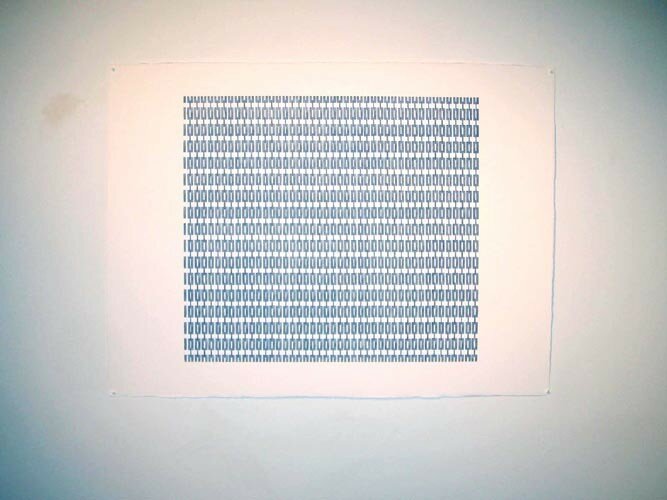 MONIQUE JANSEN
Born in 1970, Jansen graduated BFA in 1992 and MFA in 1995 from Elam School of Fine Arts, University of Auckland. She also gained her Certificate in Adult Teaching from AIT in 1995.

Jansen is driven by her fascination for the divide between the handmade and the machine-generated, and her love for repetitive mark-making. Using her ‘hand as machine’ and replicating single motifs (such as a 2mm square), she will create an entire art work – often on a large scale to intensify the significance of that simple motif.  Unable to disguise the inconsistencies unwittingly caused by the hand, Jansen delights in the element of chance that accompanies her mechanical process. From a distance these inconsistencies might manifest as undulations, and it is only on closer inspection that they are visible as the ‘hand of the artist’.

She uses the simplest of materials – stencils, pencils, paper and scissors. In addition to her works on paper, she creates other extraordinary works with painstaking care – such as the hanging necklace made of the ‘punch outs’ from a hole puncher, or the Maths exercise book in which she has cut out each square of the grid pattern on every page.  The work is laborious, intense and exact – even monotonous – yet the rhythm of the process of making draws Jansen back again and again to her work which she recognises as being a negation of society’s contemporary inclination towards ‘fast-everything’.