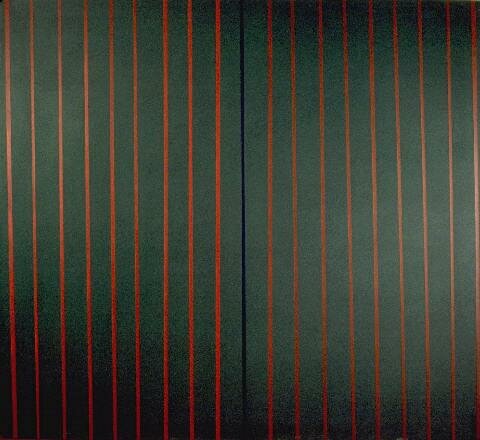 DON PEEBLES (1922 Taneatua – 2010 Christchurch)
Since his first exhibition in 1948, Peebles has continued to push the boundaries of his art practice, never accepting what he has already achieved, but striving for more. He has steadily produced a solid body of work as he has pursued a unique path in his art. Like most artists of the 1940s/1950s, he began painting landscapes but, since the mid-1950s, he has focussed on and been committed to his practice of abstract art. He was the first artist in NZ to explore constructionist abstraction, becoming well-known in the early 1960s for painted relief constructions which were typically framed in shallow-trays. The interplay and effects of light and shadow this allowed, have always held a fascination for Peebles.

By 1975, he was creating loose canvas works without frames, which hung according to the natural inclination of their weight and added relief elements. He also experimented with paper, creating exquisite relief works and, by the early 1980s, had developed and enlarged this concept by producing bold, large ‘book page’ reliefs. These ground-breaking works consisted of strips of canvas sewn vertically onto a larger canvas, and were likened to book leaves or gills. They achieved a sense of movement and evoked elements of nature. Each hanging was different in its effect due to the fluid nature of the canvas, and the light playing on the leaves. To some he attached cord, or strips of canvas looping across the whole or dangling from a part, or interlocking, shaped, canvas pieces.

In the late 1990s, Peebles returned to working more frequently on a smaller scale, creating balance and tension within works in paint on canvas on board, again within ‘tray frames’. By applying subtle markings in pencil or paint, or even leaving threads of canvas showing at the edges, Peebles lures the eye to explore each work in depth.

An exhibition at Artis Gallery, Auckland, in the year of his 80th birthday proved again his ability to produce paintings of great beauty, while still retaining the ‘cutting edge’ that has always typified his work. In confirmation of the heightening interest in his work, all but one had either sold or was subject to a ‘hold’, within a week of the opening.

Peebles was awarded the ONZM in 1999 in recognition of his services to art and, in April 2003, the University of Canterbury awarded him a LittD (Honoris Causa)