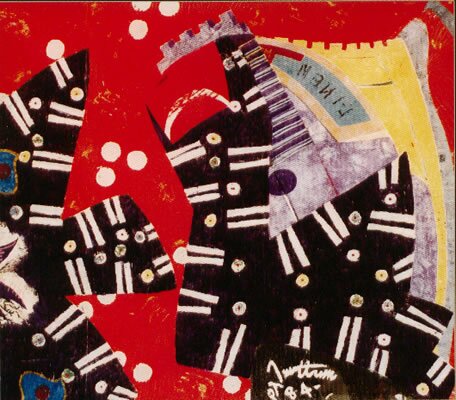 Trusttum is one of New Zealand’s leading figurative, expressionist painters. He has always been driven to paint and his output has been prolific and dynamic, reflecting his personal energy and enthusiasm. His masterly sense of colour applied with energetic expressionism conveys the passion he feels for painting, yet out of the joyful chaos of colour and imagery there is clearly a visual order, a demonstration of his unquestioned ability to create satisfyingly balanced works. Trusttum works on a large scale, painting on unstretched canvases as they lie on the floor of his shed/studio, and frequently rolling up unfinished works to store for future completion.

Since the early 1970s he has depicted his experiences and situations from everyday life, often translating realist symbols into semi-abstraction. His series have been inspired by activities to which most viewers can easily relate, such as renovations, chess games, horses, his wife’s dressmaking, Japanese masks and tennis, a game he greatly enjoys. In the latter series, his technique was to move the viewer close-up to the game, and to let them see it as if from the viewpoint of the player (or the ball!) rather than the spectator. Using details from different components of the game – the net, sole of the shoe, brand names from the clothing and racquets, the racquet strings, the lines on the ball – he created patterns within his paintings which conveyed its energy, power and speed. This patterning, at times reminiscent of indigenous art, is a distinctive feature of many of his series.

During 2004, Trusttum exhibited paintings based on Mussorgsky’s ‘Pictures at an Exhibition’. These began as a performance collaboration with the organist Martin Setchell, and Jonathon Mane-Wheoki and were a departure from previous works in that they are less personal, relating to European myths and stories.