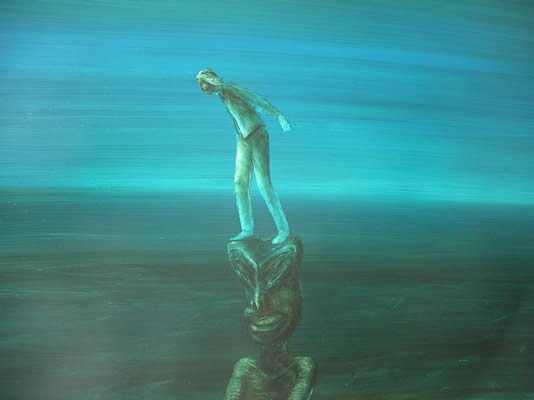 After his first solo exhibition held when he was almost 40 (his earlier works having been exhibited mainly around his home territory of Gisborne and the East Coast region of New Zealand), John Walsh quickly made a name for himself and now exhibits annually in Auckland, Wellington and Christchurch. Mainly self-taught, Walsh’s earliest works took the form of realist portraits of people he knew on the East Coast, executed in the hours when he was not working in various casual, seasonal employments.

In 1989, Walsh was invited to participate in an international mural project in New York and after returning to NZ, worked in a number of tertiary institutions. In 1993, he moved with his family to Wellington to an appointment as curator of contemporary Maori art at the National Art Gallery (now Te Papa) and it was around this time that he arrived at the artistic style for which he is so well-known now. The first such paintings tended to be small and painted on wash backgrounds but as the scale of the works increased, Walsh introduced landscape to the imagery. Some works re-present myths from Maoridom while others depict contemporary incidents he has observed in the newspapers or personally. The protagonists in Walsh’s paintings are often depicted with human bodies and faces of ancestral tikis or manaia (helpers and bringers of knowledge) or as marahikau (mermen). His work is typified by a gentle humour, and a playful interpretation of circumstances.