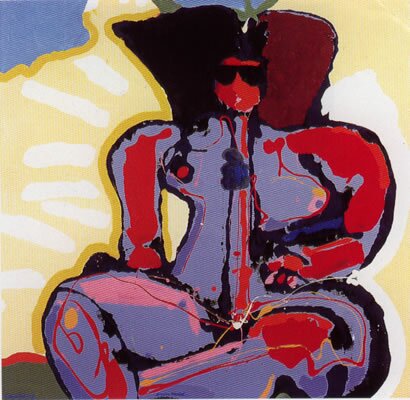 Graduated Diploma of Fine Arts, University of Canterbury School of Fine Arts, 1956.
Throughout his long career, Hanly juggled his need to express his response to matters of social conscience with his gift for creating paintings that convey great joyfulness. The resulting works were, variously, political, reflective of ‘the human condition’ or observational, particularly of family and friends. Only four of his series were abstract – New Order (1962), Pacific Icon (1966), Energy (1968-72) and Condition (1976).

Early series, painted in London and Italy, were ‘Fire’ (his response to the threat of nuclear war), ‘Showgirl’, ‘Massacre of the Innocents’ and ‘New Order’. On returning to New Zealand, Hanly was struck by the clarity and harshness of the sun’s light on the land here, and he explored this in ‘Figures in Light’ (1963).

Hanly retired after the ‘Bouquets’ series of 1994. His paintings are available now only infrequently and are strongly sought after. Above, examples from all Hanly’s series are shown.