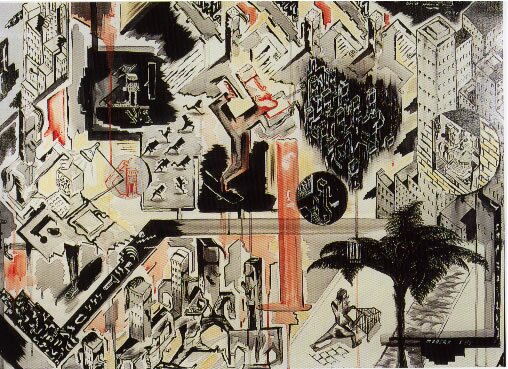 Bill Hammond is one of New Zealand’s most exciting contemporary artists and his work is in huge demand. He attended Ilam School of Fine Arts, University of Canterbury, from 1966-68. Although it wasn’t until 1980 that he began exhibiting his paintings, it didn’t take long for the New Zealand art community to take notice. Hammond’s was a distinctively individualistic ‘take’ on life, reflecting 20th century life in all its materialistic, aggressive, citified chaos, with inanimate objects seeming to take on a life of their own. His mid-1980s’ works, painted on anything from metal to wallpaper, from canvas to Holland blind, often contained challenging scenarios of aggression, crime, violence and threat, featuring characters now reminiscent of 1990s’ comic strips. Their detail rewards close scrutiny.

By the mid-1990s, however, Hammond’s paintings had assumed a haunting beauty (‘Placemakers’ series). Gone was the black humour of that grunty, tough ‘underworld’. The clothed, half-human, half-bird creatures that now populated his canvases, adopting human stances and characteristics, conveyed a feeling of quiet despair or resignation as they gazed into the distance. Never do their eyes meet ours. We are powerless observers of a strange reality as whatever it is that threatens or eludes these creatures remains out of view. Their pastimes resemble ours – they relax, have a glass of wine, play pool, interact with their young and with each other. Their attitudes, gestures and touch convey a sense of tenderness for and protection of each other, indicating that theirs in a community of togetherness.

These paintings were inspired by a trip to the Auckland Islands in 1991, and by his subsequent interest in the historically important book ‘Buller’s Birds of New Zealand’. The islands opened his eyes to the astonishing beauty of the land before human occupation, when bird and wildlife were abundant and life had a natural harmony. He says of that visit: ‘I saw a New Zealand before there were men, women, dogs and possums. When you see it without the people, you know that the soulful, beautiful thing about New Zealand is the land.’

‘Bird-people’ and ‘horse-people’ have continued to feature in Hammond’s work. In 1992 his work was included in Distance Looks Our Way, an exhibition of New Zealand artists at Expo in Seville, and in Headlands, a survey exhibition of contemporary New Zealand art at the Museum of Contemporary Art in Sydney. He was a joint winner of the Visa Gold Art Award in 1994.