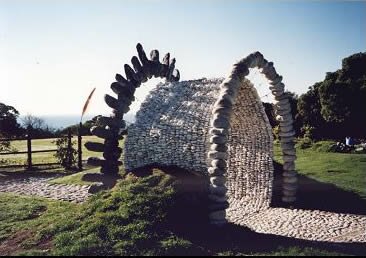 Chris Booth works closely with the land, earth forms, and indigenous peoples of the region(s) where he creates sculpture. He has a profound interest in developing a creative language that involves communication and exchange between indigenous and colonial cultures and deeply meaningful environmental works.

He has participated in numerous land art projects and exhibitions internationally in the UK, Netherlands, France, Denmark, Italy, Germany, USA, Canada, Australia, Singapore and the Canary Islands. In 1982, Booth was the recipient of the Frances Hodgkins Fellowship, University of Otago.

For more information and to see examples of Booth’s sculptures, visit his website.
To commission a sculpture, email direct.